How does the complement cascade result in pore formation in Lampreys 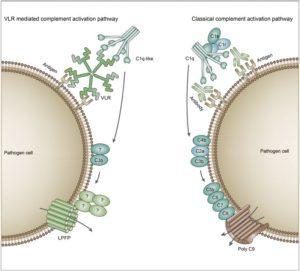 The complement system is a part of the immune system that forms the membrane attack complex (MAC). The classical complement pathway is initiated by antigen-antibody (Ab) complexes that bind to C1 in jawed vertebrates; Abs binds an antigen via its variable region while the Fc region binds C1q, leading to the cleavage and activation of C4, C2, and C3. Further downstream, C5b, C6, C7, C8, and C9 form the MAC. The MAC forms pores on target cells, disrupting the cell membrane and causing cell death. The lamprey, a jawless vertebrate, does not produce the traditional IgG or IgM Abs that initiate the antigen-Ab complex. Instead, lampreys have an alternate immune system that uses variable lymphocyte receptors (VLRs). These VLRs can control complement-dependent cytotoxicity independent of Abs. However, the final pieces of complement that form the MAC, C6 through C9, have not been observed in lampreys. In this study, the authors tried to find the molecules responsible for cell lysis in the terminal steps of VLR mediated cytotoxicity.

The researchers first confirmed that VLRs utilized a novel pore forming complex by studying the membrane proteins of E. coli, HeLa cells, and rabbit red blood cells before and after lamprey antisera treatment. With an inner diameter of 7-nm and an outer diameter of 17-nm, these VLR mediated pores had a different shape and size compared to other known pore forming complexes.

Lampreys possess an alternate immune system that employs VLR recombination instead of VDJ recombination as seen in jawed vertebrates. Previous studies showed that lamprey pore formation is initiated by antigen-VLR complexes and C1q. This study showed that LPFP forms the pore in the final step of VLR mediated cytotoxicity. Further VLR studies should be done to explore VLR’s therapeutic potential in cases where classical VDJ mediated therapies are ineffective.