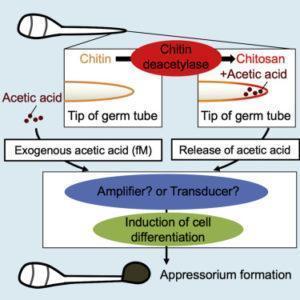 Figure: During infection in rice blast fungus, chitin from its cell wall breaks down into chitosan and acetic acid. This process stimulates cell differentiation in the host plant, leading to appressorium formation, which then facilitates the infection process.

In response to environmental changes and nutrient starvation, cells are known to undergo extreme alterations. This includes switching from one type to another (“differentiation”) and changes in metabolic pathways (“metabolic switching”). In a new study, a research team from Tokyo University of Science showed for the first time how rice blast fungus uses its own cell wall to survive in response to certain stimuli.

All living organisms respond and adapt to changes in their environment. These responses are sometimes so significant that they cause alterations in the internal metabolic cycles of the organism—a process called “metabolic switching.” For example, rice blast fungus—a pathogenic fungal species that causes the “rice blast” infection in rice crops—switches to the “glyoxylate cycle” when the nutrient source starts to deplete. Another response to environmental change is called “cell differentiation”, where cells switch to another type altogether. In rice blast fungus, for example, the fungal cells differentiate and generate a large amount of pressure on the cell wall, causing the fungus to develop a specialized structure called “appressorium,” which ultimately facilitates the infection. Such methods of adaptation have been seen across various organisms, but exactly how they occur is not very clear yet.

In a recent study published in iScience, a team of researchers at Tokyo University of Science, led by Prof Takashi Kamakura, found for the first time that extremely low concentrations of acetic acid alter cellular processes in rice blast fungus. Their research was based on the fact that Cbp1—a protein that can remove acetyl groups from chitin (the main component of the cell wall of fungi)—plays a huge role in appressorium formation by converting chitin into chitosan and releasing acetic acid. Explaining the objective of the study, Prof Kamakura says, “Metabolic switching in nutrient-deficient environments depends on changes in the nutrient source, but its mechanism has remained poorly understood until now. Since chitin was known to induce a subsequent resistance response (immune response), we speculated that Cbp1 functions to escape recognition from plants. Also, because the enzymatic activity of Cbp1 affects cell differentiation, we hypothesized that the reaction product of chitin deacetylation by Cbp1 may be a signal for cell differentiation.”

For their study, the scientists used a mutant form of the fungus that did not produce Cbp1 and thus could not form appressorium as it was unable to produce acetic acid from chitin. The scientists observed that when minuscule concentrations of acetic acid, even as low as a hundred molecules per fungal spore, were added, appressorium formation was restored in the mutants. This implied that acetic acid could act as a chemical signal to trigger cell differentiation. Then, to better understand the role of acetic acid in the glyoxylate cycle, the researchers focused on an enzyme unique to this metabolic pathway: isocitrate lyase. They found that the mutant forms of the fungus had much lower levels of this enzyme, meaning that they could not switch to the glyoxylate cycle. But, as seen before, the addition of acetic acid at an extremely low concentration was enough to restore normal levels of the enzyme and thus induce appressorium formation. “Our study is the first to reveal the novel role of acetic acid in metabolic switching and cell differentiation in eukaryotic cells,” remarks Prof Kamakura.

Interestingly, these findings indicate that using chitin molecules from their own cell wall could be a survival strategy used by several types of bacteria and fungi. This would allow them to thrive in environments deprived of nutrients—such as on the surface of a host leaf—and avoid host defense/immune mechanisms. Acetic acid could then be used both as a carbon source and as a signal to trigger metabolic switching and cell differentiation. Prof Kamakura explains, “The use of acetic acid obtained from a pathogen’s own cell wall for the activation of the glyoxylate cycle is perhaps a general mechanism in various infection processes.”

The finding that extremely low concentrations of a small, simple molecule like acetic acid could induce significant changes in cellular processes is unprecedented and was only known before for certain hormones in animals. Understanding this type of inter-species chemical interactions could prove to be immensely valuable in agriculture, bioengineering, and medicine, to name a few areas. Prof Kamakura concludes, “It is yet to be found whether this phenomenon is common to other organisms. But, since metabolites such as butyric acid derived from human intestinal bacteria are involved in immune cell activation and cancer progression, our findings have implications in a wide variety of fields, including medicine and agriculture.”

About The Tokyo University of Science

Tokyo University of Science (TUS) is a well-known and respected university, and the largest science-specialized private research university in Japan, with four campuses in central Tokyo and its suburbs and in Hokkaido. Established in 1881, the university has continually contributed to Japan’s development in science through inculcating the love for science in researchers, technicians, and educators.

With a mission of “Creating science and technology for the harmonious development of nature, human beings, and society”, TUS has undertaken a wide range of research from basic to applied science. TUS has embraced a multidisciplinary approach to research and undertaken intensive study in some of today’s most vital fields. TUS is a meritocracy where the best in science is recognized and nurtured. It is the only private university in Japan that has produced a Nobel Prize winner and the only private university in Asia to produce Nobel Prize winners within the natural sciences field.

About Professor Takashi Kamakura from Tokyo University of Science

Prof Kamakura graduated from the University of Tokyo, where he obtained a PhD in Agriculture. He worked for RIKEN institute from 1985 to 2003, mainly studying microbial toxicology. Since 1993, his main research involves studying the infection mechanisms of pathogenic fungi. He joined the Department of Applied Biological science at Tokyo University of Science as an Associate Professor in 2003 and became a Professor there in 2009. The corresponding author of this paper, his main research interest is applied microbiology, more specifically, the molecular biology of fungi and bacteria.

Funding information: This study was supported by the Japan Society for the Promotion of Science (JSPS) Grant-in-aid for Scientific Research (B) (grant number 19H02958).