How does IL-27 attenuate autoimmune neuroinflammation? 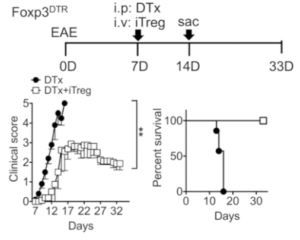 Experimental design of EAE induction and Treg adoptive transfer. Groups (n = 5∼ 8) of Foxp3DTR mice were induced for EAE as described in Materials and Methods. At disease onset (7 d postinduction), mice were treated with 1 mg of DTx alone (filled circle). Some mice received 5 3 106 Foxp3+ iTregs together with DTx (open square). The mice were daily monitored and scored for clinical diseases and survival. (Source Kim et al., Fig 1.A)

Researchers are currently exploring the potential use of Interleukin (IL-)-27 as an immunotherapeutic agent. An example of this, is the experimental administration of IL-27 to improve experimental autoimmune encephalomyelitis (EAE, murine model of multiple sclerosis) outcomes. IL-27 is a member of the IL-12 cytokine family, and was initially shown to have pro-inflammatory effects, that included preferential induction of IFN-γ. However, recent studies have shown that IL-27 also exhibits anti-inflammatory effects against Th17 immunity. The potential “protective effect” of IL-27 in the EAE model has been linked to dampening of Th17 immunity and induction of IL-10 production.

A study by Kim et al., investigated how IL-27 administration (via a slow releasing pump) mechanistically alleviated EAE severity. They showed that “therapeutic effect” of IL-27 during EAE only occurs in the presence of Tregs. This activity required direct signalling of IL-27 via its (IL-27) receptor on inducible (i)Tregs, and resulted in reduced inflammatory cytokines and T cell infiltration of the central nervous system (CNS).

IL-27 has also been shown to promote IL-10 secretion in non-Treg CD4 T cells, secretion that is capable of dampening inflammation and could be the mechanism of IL-27 mediated reduction of EAE severity. In vitro IL-27 has been shown to induce IL-10 secretion by Th1, Th17 and iTreg cells, however in vivo IL-27 only induces IL-10 production in Tregs (and Th1 and Th17 cells). In addition to induction of IL-10, Kim et al., showed that IL-27 in vivo induces expression Lag3 (negative regulator of activated T cells) in Tregs, which is required for Treg mediated protection.

In summary, findings by Kim et al., highlight the potential use of IL-27 as an immunotherapy during EAE. Where in vivo administration of IL-27 induces IL-10 production and Lag3 expression by Tregs, resulting in reduced inflammatory cytokine secretion, inflammation and pathology during EAE.