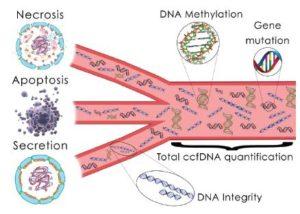 Cell-free DNA (cfDNA) is DNA found in trace amounts in blood, which has escaped degradation by enzymes. In 1994, a mutation in a well-known cancer-associated gene, RAS, was found in cfDNA from the blood of cancer patients. This sparked interest in the potential use of cfDNA as a diagnostic marker for tumors. However, until now, exactly what gives rise to cfDNA was a question that was left unanswered. Is it derived from cells that undergo programmed death in the body (apoptosis) or is it derived from cells dying by injury or inflammation (necrosis)? What are the DNA-degrading enzymes involved? Watanbe et al., 2019 led by Prof Mizuta, of the Research Institute of Biomedical Sciences at Tokyo University of Science, have now answered these questions.

Prior to this study, these scientists had already discovered an endonuclease, DNase1L3 (also called DNase γ), and found that it causes cellular DNA fragmentation during necrosis. Additionally, DNase1L3 plays “second fiddle” to caspase-activated DNase (CAD; the main degrading enzyme in apoptosis) during apoptosis. Indicating that DNase1L3 can breakdown extracellular DNA released during necrosis and/or apoptosis, into nucleosomes.

Watanabe et al., used genetically manipulated mice as study models to pinpoint the enzymes responsible for generating cfDNA. They showed that blood from DNase1L3-deficient mice had much lower concentrations of cfDNA than blood from CAD-deficient mice and normal mice, in both apoptosis- and necrosis-induced groups. The scientists thus concluded that during apoptosis, DNase1L3 is crucial as a “backup” enzyme for CAD in degrading condensed chromatin into fragments (single nucleosomes), thus giving rise to cfDNA. And in necrosis, DNaseIL3 is absolutely essential for generating cfDNA.

Additionally, Watanbe et al., showed that DNase1L3 can degrade neutrophil extracellular traphs (NETs) into cfDNA. NETs are small sticky fibers of chromatin released by neutrophils after infection or injury. Although NETs can stop harmful bacteria from spreading in the bloodstream, NET release can sometimes become uncontrolled; and cause clotting [thrombosis]. Thus based on their discovery, Wantanbe et al., suggest that DNase1L3 can be used to treat thrombosis caused by NETs. NETs are also known to be the “seeding soil” for tumors. Tumor cells released in blood might latch onto NETs and grow on them and spread to other organs. Based on their results, Prof Mizuta suggest that, “[Since] DNase1L3 degrades NETs and generates cfDNA, we speculate that DNase1L3 treatment may also be useful to prevent tumor metastasis. We are now conducting experiments to test this speculation.”

Dr Ryushin Mizuta is a Professor at the Organization for Research Advancement, Research Institute for Biomedical Science, Tokyo University of Science. The corresponding author of this study, Prof Mizuta has more than 40 research publications to his credit. His main areas of research include molecular biology, DNA damage and recombination, DNA fragmentation, apoptosis, cancer biology, molecular genetics, and immunology.