In a recent paper, Ziyang, et al., have produced novel insights into and further developed an HIV vaccine through the use of a unique trimer in order to develop Tier-2 neutralizing antibodies within a murine model.

HIV, a deadly virus that researchers today are still trying to understand, has killed 36.3 million people worldwide. A vaccine, key to preventing the spread and combatting severity of the virus, is still far from development. However, in this present study published in Nature Communications, researchers have made significant strides into the development of a promising vaccine therapy.

In the past it was extremely expensive and time-consuming to investigate the efficacy of these types of antibodies within animal models, but in this study they have established a faster method, developing a new model to produce Tier-2 neutralizing antibodies in mice. Engineering the trimer into DNA for transfection into mice, this method induces antigen production within the host without the need to manufacture a vaccine. Through comparison between mice who received the DNA-encoded native-like trimer with mice who received a standard protein immunisation, they reported that only the mice receiving the DNA-encoded native-like trimer developed Tier-2 neutralizing antibodies (Figure 1). 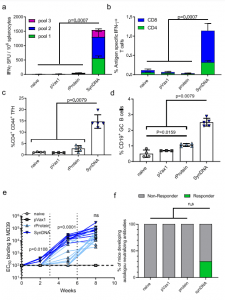 Following confirmation of the production of Tier-2 antibodies, Ziyang, et al., proceed to investigate the atomic structure of one Tier-2 neutralizing monoclonal antibody using cryo-EM. They were able to describe how the antibody is able to neutralize the virus providing insight into how one may design new vaccines that can generate broadly neutralising antibody responses to the C3V5 epitope.

In such a promising study, engineering and delivering these immunogens via nucleic acid technology into a vaccinated animal, is a massive step in the right direction. These in vivo self-assembly of structurally designed immunogens may allow us the ability to tailor certain vaccines.