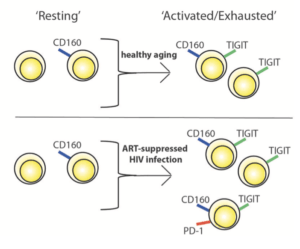 Despite improved quality of life due to anti-retroviral therapy,  HIV+ individuals have increased incidence of complication associated with aging (e.g. cardiovascular diseases, stroke) compared to age-matched general HIV- individuals. Some of these complications have been associated with high levels of inflammatory molecules C-reactive protein (CRP) and IL-6, prior to the event suggesting a potential role of increased inflammation. There is currently debate on whether these complications are due to aging associated immunity (“inflamm-aging”) or due to general increased inflammation in HIV+ individuals? Inflamm-aging is associated immune exhaustion, where immune cells have reduced effector functions and increased expression of inhibitory receptors (IRs). Thus, Belkina et al., aimed determine whether expression of IRs on immune cell subsets and inflammatory signals differs with aging, HIV infection or both.

CITRUS* analysis (CytoBank) by Belkina et al., identified a population of γδ T cells that were detected at higher proportions in aviremic HIV+ individuals compared to healthy controls.  This identified γδ T cell population expressed high levels of TIGIT as well as a sub-population of them also expression high levels of CD160. Manual gating analysis, reinforced their findings by also illustrating that that γδ T cells in aviremic HIV+ individuals expressed higher levels of TIGIT, CD160 as well increased co-expression of  2 or more IRs compared to healthy controls. Surprisingly, though expression of TGIT increased with aging in healthy individuals, this was not the case for HIV+ individuals where young and older individuals had similar co-expression profiles of IRs.

To determine if these γδ T cells were exhausted and lacked effector functions researchers sorted γδ T cells according co-expression of IRs then measured production of ex-vivo cytokines, chemokines and cytotoxic molecules in the absence of stimulation using luminex. To their surprise, TIGIT+ γδ T cells were not exhausted and produced high levels of cytokines (TNF, IFNγ, MIP1β) and cytotoxic molecules (granzyme A, granzyme B, Perforin) in aviremic HIV individuals (independent of age) compared with HIV- individuals.

This illustrates that the phenotypic co-expression of IRs and associated functional features  are context specific. Where , in the context of HIV infection TIGIT expression by γδ T cells is not a marker of exhaustion but marker of activation and is associated with a functional pro-inflammatory profile . Thus, highlighting the complexities of cellular composition and phenotype during infection, where the relationship of IR expression and exhaustion is context specific, and not universal.