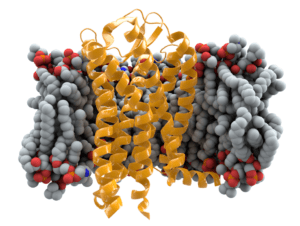 Around 37 million people are living with HIV worldwide, but only ~60% of them are receiving antiretroviral therapy (ART), and drug-resistant HIV is a growing concern, with a million deaths due to HIV in 2017. Study by Gupta et al., reports for the second time, that HIV can be cured by using allogeneic stem cell transplantation from a donor that has a homozygous genetic deletion in a portion of the C-C Chemokine receptor type 5 (CCR5) gene (CCR5Δ32/32). Approximately 1% of people carry this specific homozygous CCR5 deletion. CCR5 is a protein on the surface of white blood cells and acts as a receptor for inflammatory chemokines. In the majority of cases the HIV uses CCR5 as a co-receptor to enter cells such as CD4+ helper T cells, while a minority uses CXCR4 or both.

The first HIV-1 cure was shown a decade ago in Timothy Ray Brown (listen to our interview), infamously known as the ‘Berlin patient’. He also received allogeneic hematopoietic stem cell transplantation to treat his acute myeloid leukemia using a CCR5Δ32/32 donor. The lack of CCR5 expression from the donor cells rendered the HIV unable to infect cells. While he was cured from HIV, the patient received two other allogeneic stem cell transplantations and had to endure total body irradiation resulting in a very toxic treatment regime that almost killed him. This new report by Gupta et al. used a similar approach of allogeneic stem cell transplantation to treat for Hodgkin’s lymphoma using a CCR5Δ32/32 donor, but now utilized a much less toxic treatment regime. This patient only experienced mild gut graft versus host disease and antiretroviral therapy was interrupted 16 months following after transplantation. HIV-1 remission has been maintained for a further 18 months.

Although this second case of HIV remission is of great interest, the treatment is not safe, not scalable, and not an option for people living with ARV controlled HIV. Therefor it should be specifically reserved for people living with CCR5-tropic HIV on antiretroviral therapy, who develop cancer and require this treatment. Although there were prior attempts to reproduce the Berlin patient, they were not successful, often due to rebound with a CXCR4-tropic HIV (not susceptible to the CCR5 deletion.

In summary, this study highlights that the ‘Berlin patient’ was not an anomaly and HIV cure can be obtained with less toxic treatment regimens followed by CCR5Δ32/32 allogeneic hematopoietic stem cell transplantation.