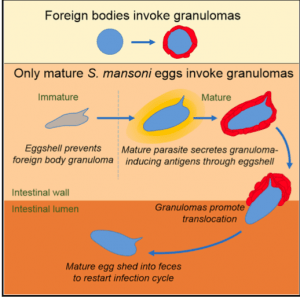 Schistosomiasis is a parasitic infection, caused by flatworms that belong to the genus Schistosoma, that affects more than 200 million globally. Schistosoma sp. has a complex life cycle which involves two hosts: snails and humans. In humans, Schistosoma sp. mature in the liver where they undergo sexual reproduction and produce eggs which are excreted in urine or faeces. As the eggs mature they secrete antigens that provoke the formation of a granuloma —an organized aggregate of macrophages and other immune cells—around it”. Granulomas often have both a protective and pathogenic role in disease. The immune system induces granuloma formation intending to restrict pathogen growth and confine infection to one site. However, some pathogens take advantage of this of the walled-off region -which is often secluded from immune cells- to replicate and grow in numbers. Uncontrolled pathogenic replication then leads to disruption of granuloma integrity resulting in spreading of the infection. A Recent study by Takaki et al. demonstrated how Schistosoma mansoni modulate granuloma formation to promote transmission.

In summary, Takaki et al., provide mechanistic evidence as to why only mature and not immature cells are shed into host faeces and demonstrated how granuloma formation in the context of S.mansoni infection is favourable to the pathogen and not the host.