Flynn Webinar: What immune cells play a role in protection against M.tb re-infection? 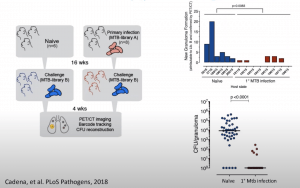 Approximately a quarter of the global population is estimated to have Mycobacterium tuberculosis infection (tuberculosis etiological agent). However, only 5-10% of infected individuals progress to disease. On the 8th of March, the IUIS-Immunopaedia-Frontiers webinar series featured a talk by tuberculosis immunologist Dr. JoAnne Flynn. In honour of World TB  Day on the 24th of March, we shall provide three summaries highlighting findings shared during Dr Flynn’s talk.

In this summary, we shall highlight research she presented that provided evidence for the role of CD4 T cells in protection against M.tb reinfection. Previous findings by Dr Flynn and collaborators demonstrated that prior M.tb infection is associated with protection against M.tb reinfection (Cadena et al., 2018). This study showed that non-human primates  (NHPs) that were re-infected had a significantly lower M.tb bacterial burden and a significantly higher proportion of sterile granulomas compared to M.tb infected naïve NHPs. Further, they showed that adaptive Th1 immune responses were not different between M.tb reinfected and naïve (primary M.tb infected) NHPs. As a follow-up to this study, Dr Flynn’s research group aimed to determine if CD4 T cells are necessary for protection against reinfection. They focused on CD4 T cells because they are important for the control of TB, and depletion results in worse acute infection and latent TB reactivation in NHPs.

To test this hypothesis, CD4 T cells were depleted in infected and treated (4-5 months of full TB therapy) NHPs before a second Mtb challenge. As controls, one group received IgG and a naive group received only Lib B. The number of Lib B granulomas in the IgG group was significantly fewer than in the naïve group, while the αCD4 group was in between the two. The IgG group had the lowest lung bacterial burden followed by the αCD4 group (16-fold higher than IgG) and lastly the naïve group (57.5-fold higher than IgG). Both reinfected groups (αCD4 and IgG) had a higher frequency of CD8 T cells producing IFNγ and/or TNF in Lib B granulomas compared to naïve NHPs but there was no significant difference when compared to each other. (Source: Ganchua et al., 2020).

In summary, results presented in the webinar suggest that CD4 T cells play an important role in protection against re-infection. This protective effect is not restricted to CD4 T cells function but is associated with the induction and maintenance of CD8 T cells that produce granzyme H and K.