Multiple sclerosis (MS) is a chronic inflammatory demyelinating disease of the central nervous system (CNS) of unknown etiology (Figure 1). It affects around 2.8 million people worldwide, and there is no definitive cure, making it a significant health concern. 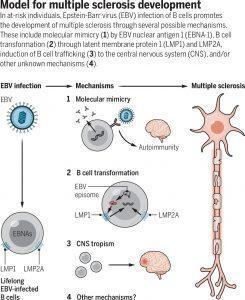 For decades, researchers have suspected that people infected with an exceedingly common virus, Epstein-Barr (EVB), might be more likely to develop multiple sclerosis, a neurological illness that affects millions of people in the whole world. Now, a team led by Harvard University researchers reports what some say is the most compelling evidence yet of a strong link between these two diseases.

The researchers employed blood samples collected among more than 10 million active-duty United States military personnel between 1993 and 2013. Looking for specific antibodies that evidenced past infection, they determined the EBV status when the first sample was taken and then followed additional samples to determine the relationship between EBV infection and MS onset during the period of active duty.

The results show that only 35 of the people who developed MS and 107 of controls were negative for EBV infection in the first blood samples. Tracking their samples over time, the team found that the risk of developing MS increased 32 times in those who became positive for EBV infection. All infections occurred before MS onset. In the follow-up samples, all but one person with MS became infected.

To discard other possibilities about MS-triggering inducers, they tested for an immune response to cytomegalovirus (another herpesvirus that is transmitted via saliva similarly to EBV), but this virus was not linked to an increase in MS risk. Additionally, using a novel tool called VirScan, which screens for evidence of an immune response to approximately 200 viruses, found no links between other viruses and MS risk.

To test whether EBV infection preceded MS-related nervous system damage, the team looked at a molecule called neurofilament light chain (sNfL), a substance released into the spinal fluid and blood when nerve wires (axons) are damaged. In people with MS who were EBV negative at the beginning of the study, there was no indication of elevated sNfL until they were infected with EBV. After infection, elevated levels were detected prior to the MS diagnosis.

Although these findings provide compelling data that implicate Epstein-Barr virus as the trigger for the development of multiple sclerosis, the mechanism (or mechanisms) of EBV-mediated MS development remains elusive. Possibilities include molecular mimicry, through which EBV viral protein sequences mimic human myelin proteins and other CNS proteins and thereby induce autoimmunity against myelin and CNS antigens.

The authors finally discuss that there is no way to avoid infection by the Epstein-Barr virus. The Epstein-Barr virus is quickly passed between people, and most people have already been exposed. There are vaccines in development that, if proven safe and effective, should be tested in people who are at higher risk for MS, such as people with close family members with MS.