GET OUR MONTHLY NEWSLETTER
Immunopaedia > Breaking News > Dual BCR and TCR co-expressing lymphocyte could play a role in T1D pathogenesis.

Dual BCR and TCR co-expressing lymphocyte could play a role in T1D pathogenesis. 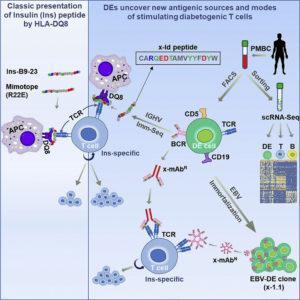 Classical immunology states that expression of the B cell receptor (BCR) or T cell receptor (TCR) defines B and T cells respectively, and no cell can express both receptors. This central dogma of adaptive immunology is being challenged by Ahmed et al., a group of researchers at Johns Hopkins University who recently discovered a novel cell population that co-expresses functional BCRs and TCRs. Ahmed et al., discovered this novel lymphocyte population in individuals with type 1 diabetes (T1D), and called it “dual expresser” (DE) cells because they expresses genes specific to both B and T cell lineages.

Ahmed et al., showed that DE cells were found to be significantly more abundant in T1D patients than in control patients. It was also found that DE cells in T1D patients but not healthy control groups expresses a unique BCR sequence embedded in their genome. This is very unusual, because BCRs are meant to be very diverse, so that they can recognise diverse set of antigens.

Immunogen binding to the DE cells BCR, results in expression of monoclonal antibodies. These antibodies are potent autoantigens, and have a similar peptide sequence to insulin peptide that preferentially forms complexes with the HLA-DQ8 molecule stimulating insulin-autoreactive T cells. These T cells then target and eliminate insulin-producing β cells in the pancreas, which ultimately deprives the body of insulin and leads to T1D.

In summary, Ahmed et al., study represents one of the first studies to show a rare population dual expresser cells that co-express BCR and TCR. These DE cells in T1D patients express an auto-antigen which can activate auto-reactive insulin specific T cells. Identification of the unique  amino sequence detected in DE cells may help diagnose type 1 diabetes in the future and if the study is proven correct textbooks will need to be rewritten to include DE cells.