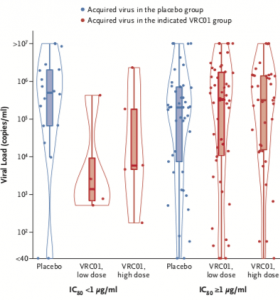 Cumulative Incidence of HIV-1 Infection and Prevention Efficacy According to IC80 Category. Graph shows the distribution of viral loads at detection, stratified according to the treatment group and IC80 category. A red dot indicates an acquired virus in the designated VRC01 group, and a blue dot an acquired virus in the placebo group. In the box-and-whisker plots, the top and bottom of the box indicates the interquartile range, the horizontal line the median, and the whiskers the range. The shapes drawn around the box plots in Panel B are violin plots showing the kernel probability density of the viral load data at different viral load values. (Source Corey et al. 2021)

Researchers are investigating alternative strategies to life-long anti-retroviral treatment. An example of such a study is the antibody-mediated protection (AMP) proof-of-concept trials* that tested the capability of VRC01#, HIV-specific broadly neutralising antibody (bNAb) to prevent HIV-1 acquisition.

Participants in the AMP trials received 10 administrations of either high (30mg/kg) or low (10m/kg) lose dose of VRC01 at 8-week intervals for 20-months, and were routinely monitored (every 4 weeks) for the acquisition of HIV. Unfortunately, administration of VRC01 did not significantly lower incidence of HIV acquisition demonstrated by an efficacy of 26.6% in HVTN704/HPTN085 and 8.8% in HVTN 703/HPTN 081. Analysis of HIV viral isolates demonstrated some efficacy (75%) against VRC01-sensitive (80% inhibitory concentration of 1ug/mL) HIV strains which constituted minority of isolates (10% of infected individuals) and was associated with a much lower viral load at onset of infection than individuals infected with VRC01 resistant strains.

In summary, despite the disappointing efficacy of VRC01 against HIV acquisition. The AMP trial did demonstrate a proof of concept of the trial concept, highlighting the need for future studies to test the potential efficacy of a cocktail of HIV-specific bnAbs that bind to different HIV antigens.