MAIN NAVIGATION
GET OUR MONTHLY NEWSLETTER
Immunopaedia > Breaking News > Does mumps immunity induced by 2 doses of MMR wane in adulthood?

Does mumps immunity induced by 2 doses of MMR wane in adulthood? 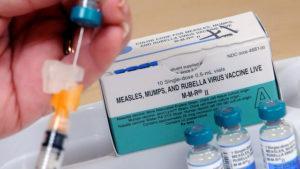 A nurse demonstrates how a measles vaccine is administered at the Orange County Health Department on May 6, 2019 in Orlando, Florida. According to the Centres for Disease Control and Prevention, the number of measles cases in the United States as of May 6, 2019 has climbed to 764 in 23 states, with 60 new cases reported in the past week, breaking recent records. (Photo by Paul Hennessy/NurPhoto via Getty Images)

Mumps is an acute viral infection that causes fever and inflammation of the salivary gland. A live attenuated mumps vaccine was first licensed in the 1960s and evolved to a trivalent measles-mumps-rubella (MMR) vaccine in the 1970s. In some regions, MMR is administered as 2 doses, to ensure optimal induction of protective immune responses. Surprisingly, over the past decade, there have been multiple outbreaks of mumps primarily in high-density settings such as colleges. Interestingly, these outbreaks have been observed in vaccinated individuals and is not due to vaccine hesitancy as is the case for measles. There could be multiple reasons for the increased mumps cases, some of which include potential waning of mumps immunity or the lack of efficacy against the wild-type circulating virus. Researchers from Emory University and Centres for Disease Control and Prevention in the US aimed to determine if individuals vaccinated with 2 doses of (97% of the cohort) MMR in childhood have waned mumps-specific antibody (Ab) and memory B cell (MBCs) responses.

Rasheed et al., showed that Abs to mumps, measles and rubella, were detected in more than 90% of participants. However, the concentration of mumps-specific-Abs were significantly lower than those specific for rubella. Functional analysis of mumps-specific Abs showed that vaccine-induced Abs had significantly lower neutralisation capacity against wild type mumps virus (Genotype G) compared with the vaccine strain (JL, genotype A). Maintenance of humoral immunity is facilitated by the presence of MBCs which produce Abs upon infection. When researchers measured MBCs frequencies, they observed significantly lower levels of mumps-MBCs compared to both measles- and rubella- specific MBCs. Based on these results a potential reason for increased mumps cases in MMR-vaccinated adults could be due to waning immunity, as well as the reduced ability of Abs to recognise and neutralise wild-type mumps virus.

Overall these results also highlight the potential need to re-think vaccine schedule and potentially antigens in successful viral-vaccines developed pre-2000, as circulating strains of viruses may have changed over time resulting in reduced vaccine efficacy. However, this may be low hanging fruit.