Does HIV superinfection induce an additive or synergistic Ab effect? 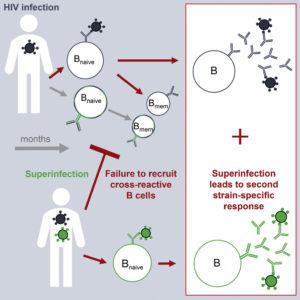 One of the hurdles of HIV vaccine design is developing a vaccine capable of inducing cross-reactive broadly neutralising antibodies (Ab) that can neutralise the large diversity of HIV envelope (env) proteins. Understanding immune responses in individuals who have HIV superinfections* could be the key to understanding how the immune system responds to sequential exposure to two distinct HIV env antigens. Results from such studies can inform the design of future heterologous prime-boost HIV vaccine strategies. HIV superinfection could either induce Ab responses that have an additive effect (induction of two or more HIV strain specific-Ab responses) or synergistic effect (promotion of cross-neutralising Ab (nAb) to epitopes conserved in both viral strains.

Study conducted by Sheward et al., assessed immune responses from a longitudinal (2 years) cohort of women (108) whom had acute/early HIV infection. This study design enabled researchers to identify and isolate founder (primary) and secondary infecting virus prior to viral recombination. Of the 108 women in the cohort, 5 (results based on 4) women became superinfected during the follow up period. They hypothesised that memory responses after HIV superinfection would (1) be higher than primary responses, (2) be induced quicker than primary responses and (3) neutralise both primary and secondary infecting virus.

In summary, Sheward et al., demonstrated that HIV superinfection did not improve primary memory responses but rather induced potent  de novo immune responses that resulted in an additive nAb effect.