GET OUR MONTHLY NEWSLETTER
Immunopaedia > Breaking News > Does cancer immunoediting occur in humans?

Does cancer immunoediting occur in humans?

The term cancer immunoediting evolved from a theory earlier known as ‘cancer immunosurveillance’ where it was proposed that the in order to maintain homeostasis the immune system had to get rid of any transformed cells.  Since the theory of cancer immunosurveillance came to be as a result of studies that were done in murine sarcomas, it has remained quite uncertain as to whether this same principle applies or can be extended to human cancers.

To determine whether cancer immunoediting does indeed occur naturally during the course of human cancers, the same way it has been observed in animal models, the authors looked at the evolution of 70 pancreatic ductal adenocarcinomas (PDACs), over a period of ten years in 15 individuals. PDAC, in particular, was chosen because it has fewer than 35 neoantigens on average compared to other cancers that have close to 112.

The authors were able to establish that tumours that evolve under stronger immune pressure lose more neoantigens. Since they did provide evidence of the existence of immunoediting in a low-mutated cancer like PDAC, the authors stated that “this strengthens the claim that immunoediting is a broadly conserved principle of carcinogenesis”.

When it comes to what the hallmarks or characteristics of what immunoediting might look like in humans, the authors observed that this manifests in the loss of immunogenic antigens and that is driven by how strong selection pressure is.

Using a neoantigen quality model they previously produced, the authors sought to find out whether the likelihood of the immune system recognizing or tolerating a neoantigen was influenced in any way by the neoantigen’s quality.

The authors wanted to see if they could quantify how the immune system recognizes mutations. To do this, they carried out machine learning in C to come up with a metric that can capture how T-cells cross-react between peptides. The authors stated, “Although we used our quality model to identify immunogenic neoantigens, we propose that it captures common immunogenic features in antigens. Thus, we anticipate that our model can further illuminate the biology of antigens beyond cancer, including T cell cross-reactivity between antigens, pathologies of cross-reactivity (such as autoimmunity) and therapies that require rational antigen selection (such as vaccines).” 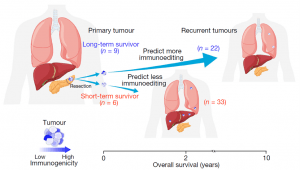