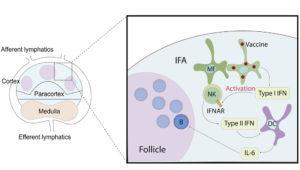 Natural killers cells (NKs) are one of the first responders and mediators of inflammation. However, their exact role in vaccine induced immunity is not adequately defined. In vivo NKs have been shown to migrate to the lymph node in an IL-1, interferon (IFN)α/β or CXCR3 dependent manner, whether this is equally important during vaccination is not clear. NK cells can directly recognise influenza via its receptor NKp46, suggesting a potential role of NKs in influenza vaccine induced immunity.

During the early phase of vaccination (12 hours post-vaccination), NKs are recruited to the lymph node in antigen dependent manner which requires IFNα/β signalling.. Farsakoglu et al., showed that it is the direct effect of the antigen presence and not just inflammatory signalling via IFNα/β receptors (IL-1R or CXCR3) during immunisation that results in NK recruitment. Lymph node macrophages (LMNs) are one of prominent sources of Type I IFNs during the early phase post influenza vaccination. Farsakoglu et al., showed that in the absence of LMNs, NKs activation and functions 12 hours post vaccination is reduced. Highlighting the importance of LMN vaccine-induced NKs activity. This interaction resulted in expression of IFN-γ by NK cells, in fact NK cells were shown to be the main producers IFN-γ. They further showed that IFN-γ expression by NK cells directly induced IL-6 expression by CD11b+ dendritic cells (DCs) during the early phases of post vaccination (12hrs).

Why did the researchers focus on IFN-γ dependent IL-6 production by CD11b+ DCs? IL-6 has been shown to affect B cell responses. Therefore researchers wanted to know if NK activity indirectly affects B cell and antibody responses. Indeed researchers showed that depletion of IL-6 as well as NK cells or IFN-γ expression by NK cells in vivo resulted in reduced numbers of influenza-specific antibody secreting cells. Thus,  demonstrating the importance of IFN-γ  and IL-6 in generation of influenza-specific humoral immunity.

In summary, this study highlights the role of vaccine induced NK-cell mediated immunity in the regulation of influenza specific humoral immunity, via expression of IL-6 by DCs.