Do neutrophils play a role in age-associated increase in flu mortality? 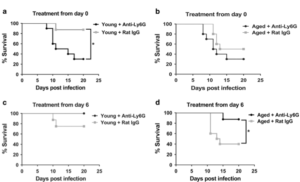 Aged mice infected with influenza showed a 3-fold increase in neutrophils count in the lung compared to young mice 6 days post-infection. Depletion of neutrophils after Influenza infection, improves survival of aged mice to 80% from 40% in controls, while it did not impact viral clearance (Fig1). However, depletion of neutrophils at the onset of viral infection exacerbates the survival rate leading to increased mortality. These findings suggest that excessive neutrophil recruitment and function are responsible for mortality in aged mice. Neutrophils isolated from bone marrow of aged mice showed increased chemotaxis towards bronchoalveolar lavage (BAL) collected from aged mice compared to young mice. Consistent with these results, levels of neutrophil chemoattractant, i.e., CXCL1 and CXCL2 in the BAL showed a 2-4-fold increase in comparison to young mice and antibody-blockade of CXCL1 and CXCL2, reduced the neutrophil chemotaxis towards aged lung lysate. To investigate the source of chemo-attractants, alveolar epithelial cells (AECs) were isolated and cultured from young and aged mice. AECs from aged mice produced the highest levels of CXCL1 and CXCL2.

Overall, these findings indicate that the mechanism by which excessive neutrophils accumulation occurs after Influenza virus infection is through AEC produced CXCL1 and CXCL2 recruitment of neutrophils. This study implies that mortality in older people infected with the influenza virus could be reduced by therapies that target AECs, neutrophils, and interactions between AECs and neutrophils.