Development of an inactivated vaccine candidate for SARS-CoV-2

The virus SARS-CoV-2 has causes COVID-19 disease which has led to an unprecedented public health crisis world-wide. The scientific community is still searching for a vaccine and there are currently no SARS-CoV-2 specific treatments, an effective vaccine is urgently needed.

Researchers have developed a “pilot-scale production of a purified inactivated SARS-CoV-2 virus vaccine candidate (PiCoVacc), which induced SARS-CoV-2-specific neutralizing antibodies in mice, rats and non-human primates”. The induced antibodies neutralized 10 representative SARS-CoV-2 strains which suggests that there may be a possible broader neutralizing ability.

The researchers showed evidences for the safety of PiCoVacc in macaques; and did not observe infection enhancement or immunopathological exacerbation in their studies. “The results suggest a path forward for clinical development of SARS-CoV-2 vaccines for use in humans. Phases I, II and III clinical trials with PiCoVacc, as well as other SARS-CoV-2 vaccine candidates, are expected to begin later this year”. 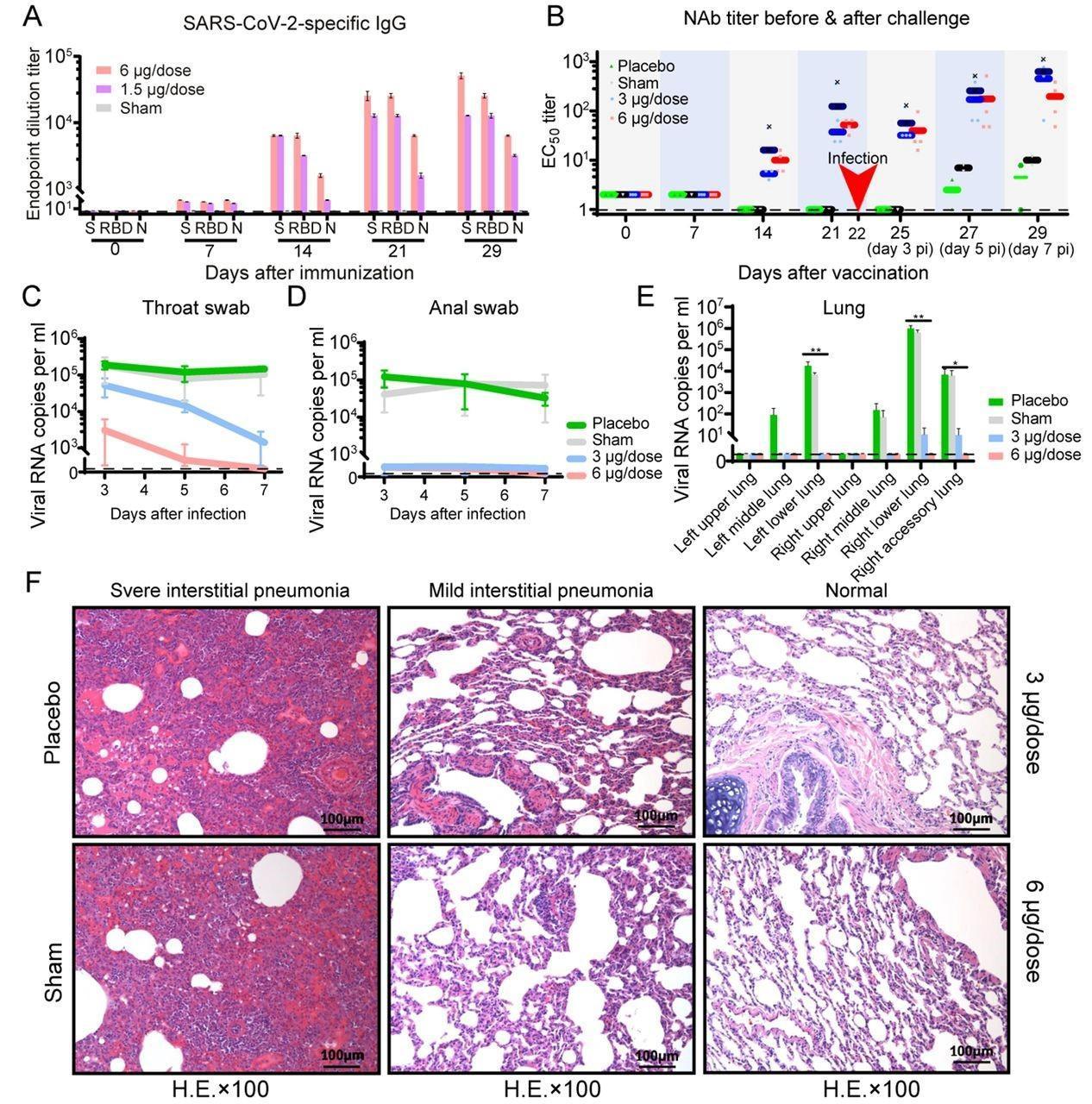 Immunogenicity and protective efficacy of PiCoVacc in nonhuman primates. Macaques were immunized three times through the intramuscular route with various doses of PiCoVacc or adjuvant only (sham) or placebo (n=4). SARS-CoV-2-specific IgG response (A) and neutralizing antibody titer (B) were measured. Data points represent mean +/− SEM of individual macaques from four independent experiments; error bars reflect SEM; dotted lines indicate the limit of detection; horizontal lines indicate the geometric mean titer (GMT) of EC50 for each group. Protective efficacy of PiCoVacc against SARS-CoV-2 challenge at week 3 after immunization was evaluated in macaques (C-F). Viral loads of throat (C) and anal (D) swab specimens collected from the inoculated macaques at day 3, 5 and 7 pi were monitored. Viral loads in various lobes of lung tissue from all the inoculated macaques at day 7 post-infection were measured (E). RNA was extracted and viral load was determined by qRT-PCR. All data are presented as mean ± SEM from four independent experiments; error bars reflect SEM. Asterisks represent significance: *P < 0.05 and **P < 0.01. Histopathological examinations (F) in lungs from all the inoculated macaques at day 7 post infection. Lung tissue was collected and stained with hematoxylin and eosin.