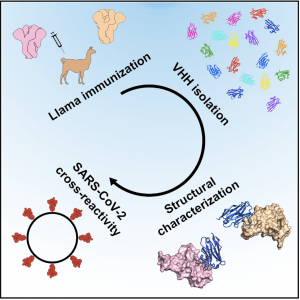 Unlike humans, llamas produce heavy-chain only antibodies (HCAbs) that have a single variable domain. These HCAbs are much smaller, have higher thermal and chemical stability than Abs produced by humans, making it easier to construct into multimers that could potentially be used as therapeutics that could be adminstered in various ways including using inhalers. Article by Wrapp et al., describes the isolation and identification of a SARS-CoV neutralising antibody following immunisation of llamas with prefusion stabilised betacoronavirus spike proteins.

In their article, Wrapp and colleagues report isolation of HCAb against the receptor-binding domain (RBD) of the SARS-CoV-1 spike (S) protein, that also cross-reacts with the SARS-CoV-2 RBD, and blocks its interaction. Researchers showed that the isolated HCAb referred to as SARS-VHH-72 binds to SARS-CoV-2 epitopes that overlap with a recently described human SARS-CoV-2-specific Ab CR3002. Interestingly, SARS-VHH-72 can prevent ACE-2 binding and has neutralisation capacity against SARS-CoV-2, and potentially other zoonotic betacoronaviruses.

Researchers hope “that because of their favorable bio-physical properties and their potent neutralization capacity, SARS VHH-72, and VHH-72-Fc may serve as both useful reagents for researchers and as potential therapeutic candidates.”