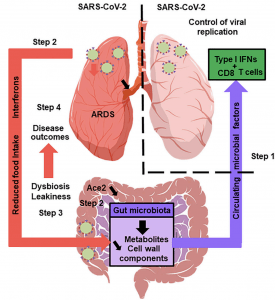 The Gut Microbiota’s Hypothetical Role in SARS-CoV-2 Infection: A healthy gut microbiota boosts the lungs’ antiviral response, including inter- feron production and the effector function of CD8+ T cells (step 1). Soon after infection, SARS-CoV-2 replicates in the intestinal compartment and decreases the expression and activity of ACE2 (step 2). This leads to gut dysbiosis and gastrointestinal symptoms (step 3). Meanwhile, viral infection of the lungs triggers the systemic production of interferons and elicits weight loss, both of which trigger gut dysbiosis (step 3). Changes in the composition and functional activity of the gut microbiota and impairment of the gut’s barrier function contribute to disease outcomes, including ARDS, a systemic cytokine storm, and multiorgan dysfunction (step 4). (Source: Trottein & Sokol, Cell Reports 2020)

SARS-CoV-2 infection and COVID-19 pathology primarily affect the lungs, and severe disease is associated with acute respiratory distress symptoms (Read: Cytokine Release Syndrome & COVID-19; Exaggerated immune response to Covid-19 & Multi-organ damage is a hallmark of severe COVID-19). In addition to pulmonary pathology, gastrointestinal tract (GIT) symptoms have also been observed in COVID-19 patients and are more associated with severe compared to mild pathology (Also read: Getting to the guts of SARS-CoV-2 infection; Faecal shedding of SARS-CoV-2 ). How does SARS-CoV-2 infection cause GIT complications? A recent review in Cell Reports by Trottein & Sokol aimed to “suggest hypothetical mechanisms leading to gut symptoms, and discuss the potential consequences of gastrointestinal disorders on the outcome of the disease.”

Authors hypothesise that SARS-CoV-2 associated  GIT symptoms are likely due to dysregulation of ACE-2 (SARS-CoV-2 host target) expression and activity in the GIT. ACE-2 is an essential regulator of intestinal homeostasis, and is involved in the absorption of nutrients especially amino-acid. Murine studies have shown that down regulation of ACE-2 results in dysregulation of the gut microbiota, and similar observations have also been documented in humans. Specifically researchers have observed that individuals with SARS-CoV-2 associated GIT symptoms, also have enrichment of opportunist pathogenic bacteria in the GIT. “Whether these changes increase intestinal mucosal permeability…ultimately triggering inflammation and cytokine release exacerbation, remains to be investigated”.

What are the implications of gut dysbiosis during COVID-19 pathology? Unfortunately, we do not know at present. However, influenza studies have demonstrated that a balanced gut microbiome promotes induction of type I interferons and other inflammatory cytokines, which are critical for viral clearance. Based on available evidence, the authors “suggest that SARS-CoV-2 infection alters the gut-blood barrier and thus leads to systemic dissemination of bacteria, endotoxins, and microbial metabolites. This might affect the host’s initial response to SARS-CoV-2 infection and might then contribute to multi-system dysfunction, septic shock, and the systemic inflammation storm seen in the second phase of SARS-CoV-2 infection”.