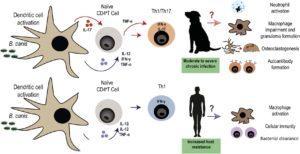 Canine brucellosis is a worldwide disseminated disease caused by Brucella canis, an intracellular bacterium that causes reproductive disorders and multisystemic inflammatory lesions. Like other intracellular microorganisms, Brucella spp. uses different mechanisms to evade the immune system. Of particular scientific interest is the interaction that it establishes with antigen-presenting cells that allows it to interfere with the development of an effective cellular immune response, causing chronic infections. Studies have demonstrated differential cytokine and activation profiles of monocyte-derived dendritic cells (MoDCs) isolated from humans and canines.

Study by Pujol et al., aimed to contribute to a better understanding of the immune-pathogenesis of B. canis, in this work they investigate the CD4+ T cell responses after encountering B. canis-primed MoDCs. They conducted in vitro B. canis stimulations of CD14+ monocytes, MoDCs and CD4 T cells isolated from canine and human peripheral blood mononuclear cells (PBMCs, see methods for more details).

In conclusion, this study demonstrates that there is a difference in the in vitro cellular immune responses elicitated to B. canis in canines and humans. This partially could determine the greater susceptibility of domestic canines to B. canis infection since the Th1/Th17 response found could interfere with the development of an effective Th1 response. Although further investigations are required, their results provide relevant information that could contribute to develop therapeutic or preventive alternatives for the efficient control of brucellosis.