MAIN NAVIGATION
GET OUR MONTHLY NEWSLETTER
Immunopaedia > Breaking News > CNS-neuroinflammation: not all myeloid cells are responsible

CNS-neuroinflammation: not all myeloid cells are responsible 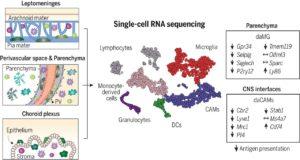 The central nervous system (CNS) is largely considered as an immune privileged site. Recently, this school of thought has been shown to be nuanced, where myeloid cells such as microglia (MS) and CNS-associated macrophages (CAMs) have been observed in healthy CNS. During neuroinflammation these myeloid population drastically change. How, why and which specific myeloid population plays a role neuroinflammation is not fully understood.

CNS autoimmune diseases such as multiple sclerosis can be very debilitating. Priming of encephalitogenic T cells (T cells autoreactive to CNS antigens) by antigen presenting cells (APCS) in the CNS has been implicated as one of the drivers of CNS autoimmune pathology. Jordão et al., aimed to determine disease-specific myeloid cell dynamics associated with neuroinflammation using a murine model of neuroinflammation (experimental autoimmune encephalomyelitis (EAE). They specifically used this murine model with single-cell RNA-sequencing, fate mapping and in-vivo imaging to track the diverse cell populations.

Single-cell profiling enabled researchers to identify previously unknown microglia, CAM and other myeloid phenotypes, which have high plasticity enabling them to change their phenotypes depending on the immunological context. Jordão et al., observed differences in the transcriptional profiles and composition of these myeloid populations when they compared samples taken during homeostasis and neuroinflammation. Specifically, there was increase in the proportion of monocyte-derived myeloid cells and dendritic cell subsets during neuroinflammation. Additionally, neuroinflammation was associated with an increase in CAM proliferation, “alongside continuous monocyte infiltration”.

Finally, they showed that though both monocyte derived myeloid (MDM) cells and CAMs were equally able to bind to T cells, MDM cells (and not CAMs) that expressed high levels of CD2 CCR2 & CX3CR1+ preferentially had prolonged T cell interaction. Suggesting that they could be responsible for “reactivation” of encephalitogenic T cells and increased neuroinflammation. In summary, Jordão et al., identified potential targets (pending validation) for novel immunotherapeutic strategies against CNS neuroinflammation.