Class-switch recombination of antibodies occurs prior to germinal center formation. 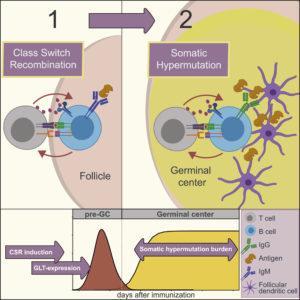 It is believed that upon immunization, two important processes occur that alter the function and reactivity of antibodies (immunoglobulins, Ig) resulting in long-lasting immune protection. One process is a change in antigen reactivity of B cells due to editing of the antigen recognition side of the antibody (a process called somatic hypermutation, SHM) with subsequent clonal selection, the other process is class-switch recombination (CSR). Class-switch recombination is a rearrangement of the immunoglobulin (Ig) heavy chain locus. Mature B cells are hereby able to switch from an IgD-IgM isotype to IgA, IgG, or IgE isotype classes that have different effector functions, while maintaining their antigen specificity. Both processes were believed to take place in germinal centers (GCs), a specialized microenvironment in secondary lymphoid organs. In the recent article of Roco et al., they show that CSM actually occurs prior to GC formation and alters our current understanding of antibody responses.

The authors used an immunization model in which mice received hen egg lysozyme (HEL) specific B cells and HEL protein and found that evidence of CSR recombination occurred as early as 1.5 days post-immunization (at the T cell : B cell border), prior to GC formation at 3.5 days. To address this phenomenon in a polyclonal repertoire, they analyzed isolated germinal centers of immunized mice and assessed the number of obtained mutations and the specific immunoglobulin isotype. Phylogenetic analyses showed that class switching occurred before obtaining mutations in the variable region of the antibody. The diminished CSR upon GC formation might be due to the upregulation of the transcriptional repressor BCL6, essential for germinal center formation, as BCL6 bound to the promoter region of APEX1 (required for CSR) and not APEX2 (required for SHM), hereby potentially blocking the action of APEX1.

These findings shed new light on the timing of CSR, as ongoing CSR within the GC would skew the isotype distribution and does not support the IgM-dominated GCs reported by Roco et al. In addition, maintenance of IgM+ memory B cells might actually represent a reservoir of B cell memory that can undergo later CSR upon reactivation to adapt to different reactivities. Patients with B cell mediated immune disorders might benefit from these insights on how B cell regulate CSR as this identifies a certain window for potential clinical intervention.