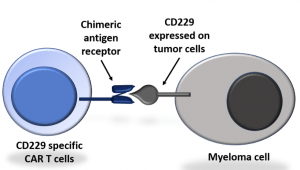 Multiple myeloma (MM) is a clonal plasma cell malignancy which causes an incurable disease. MM develops in bone marrow and causes bone lesions with fractures, kidney failure, bone marrow failure, and immunoparesis with fatal infections.  It usually occurs around the age of 60 and is more common in men than women. With the current available treatment cure is not achieved, however, treatment is associated with a five-year survival of about 49%.

Overall the work by Radhakrishnan et al highlights another target for CAR T cells for the treatment of MM patients. Although the results are promising in preclinical study, a favourable response by the MM patients in the clinical trial will be truly encouraging.