GET OUR MONTHLY NEWSLETTER
Immunopaedia > Breaking News > Can vaccinating cats against their own proteins reduce cat allergies in humans?

Can vaccinating cats against their own proteins reduce cat allergies in humans? 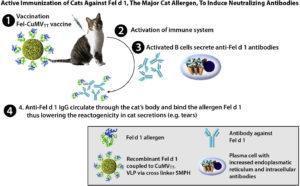 Cats are found in about 25% of households in Western countries, and approximately 10% of the human population has cat allergies. Allergic patients usually try to avoid cats (reducing allergen load in the environment) or treat their allergy symptoms since there is no efficient treatment available for this type of allergy. Several feline allergens have been identified, the importance of Fel d1 as the major cat allergen has been emphasized in numerous studies (90% of patients allergic to cats have specific IgE antibodies to this allergen). Fel d 1 is constitutively produced by salivary, skin, lacrimal, and perianal glands in cats.

Recently, researchers from Switzerland and United Kingdom have collaborated to develop a new strategy to treat cat allergies in human subjects by immunizing cats against their own major allergen. The vaccine targeting Fel d1 in cats will affect the allergic response by inducing Fel d 1–specific antibodies in the animal. These antibodies will bind endogenous Fel d1 and thus decrease or neutralize its allergenic effect in human subjects.

In their methodology, a conjugate vaccine consisting of recombinant Fel d 1 and a virus-like particle derived from the cucumber mosaic virus containing the tetanus toxin–derived universal T-cell epitope tt830-843 (CuMVTT) was used to immunize cats. The first tolerability and immunogenicity study, including a boost injection, was conducted by using the Fel-CuMVTT vaccine alone or in combination with an adjuvant.

The results of this study showed that the vaccine was well tolerated and had no overt toxic effect. All cats induced a strong and sustained specific IgG antibody response. The induced anti–Fel d 1 antibodies were of high affinity and exhibited a strong neutralization ability tested both in vitro and in vivo. A reduction in the endogenous allergen level and a reduced allergenicity of tear samples, were also observed.

In conclusion, this study demonstrated that vaccination of cats with Fel d1 displayed on CuMVTT-VLPs results in high-titer and long-lasting antibody responses. Antibodies bound to the solvent-exposed surface of Fel d1 and were able to neutralize the allergen both in vitro and in vivo. Vaccination of cats with Fel-CuMVTT induces neutralizing antibodies and might result in reduced symptoms of allergic cat owners. Hence, allergic cat owners may be treated by means of immunization of their cats against Fel d1.

The authors  reported that both human subjects and animals could profit from this treatment because allergic cat owners would reduce their risk of developing chronic diseases, and become more tolerant of their cats, which therefore could stay in the households and not need to be relinquished to animal shelters.