GET OUR MONTHLY NEWSLETTER
Immunopaedia > Breaking News > Can fat help us combat infection?

Can fat help us combat infection?

In a new study from Nature Communications, Mistry, et al., have reported on how our immune cells use Free Fatty-acid (FFA) transport to fight infection. These insights could help develop new methods of treating bacterial infections. Acute infection is known to induce rapid expansion of hematopoietic stem cells (HSCs), but the mechanisms supporting this expansion remain incomplete.

Through investigation using Salmonella typhimurium, the researchers went on to track fatty acid movement and consumption in live hematopoietic stem cells (HSCs) (Figure 1). They analysed the immune response through analysis of liver damage. It was reported that HSCs recruit high energy free fatty-acids from the body’s fat stores in order to combat infection. The team found that in the bone marrow where blood stem cells are resident, infection signals drive adipocytes to release their fat stores as fatty acids into the blood. HSCs make use of FFAs by means of energy transfer, using the fatty-acids to produce lymphocytes geared towards combatting infection. 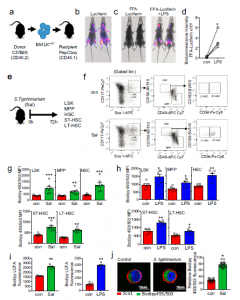 The researchers were also able to identify a mechanism by which the fatty acids are transferred, regulated and utilised (Figure 2). When our bodies are fighting infection, this requires significant amounts of energy and fat stores are huge energy deposits, which can provide fuel for the blood stem cells to use in the immune response. 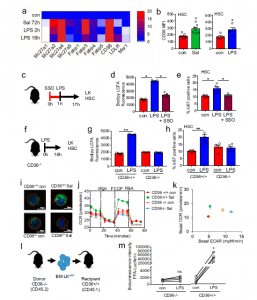 Figure 2: CD36 regulates long-chain free fatty-acid uptake in HSC in response to infection. a Heat map of fatty-acid transporter genes differentially expressed by HSCs from control, S. typhimurium (Sal), and LPS-treated animals. b Flow cytometry analysis of CD36 expression in the HSC of S. typhimurium and LPS-treated animals. n = 5 in each group. c C57BL/6 J mice were pre-treated with SSO for one hour before treatment with LPS for 16 hours. n = 5 in each group. d The cells from control, LPS, or LPS and SSO-treated animals were isolated and long-chain fatty-acid (LCFA) uptake was measured using the QBT assay. n = 5 in each group. e Percentage of cycling HSCs as measured by Ki67-positive cells after pre-treatment followed by LPS treatment. n = 5. f Schematic diagram of the experiment. g The LK cells from LPS-treated CD36−/− or WT (CD36+/+) mice were isolated and long-chain fatty-acid (LCFA) uptake was measured using the QBT assay. n = 5. h Percentage of cycling HSCs from LPS-treated CD36−/− or WT (CD36+/+) mice as measured by Ki67- positive. n= 5 mice in each group. i CD36−/− or WT (CD36+/+) were infected with S. typhimurium (Sal). Representative live-cell fluorescent microscopy images of LSK cells isolated from the mice, Sca1 membrane stain (red), Bodipy 493/503 (green) and Hoechst 33342 (blue), 20 LSK cells from five mice in each condition. j CD36+/+ and CD36−/− mice were treated with S. typhimurium the animals were killed and the LSK population was isolated by FACS, OCR was measured. n = 5. k Basal ECAR compared to basal OCR levels before and after treatment with LPS or S. typhimurium. Basal OCR normalized to rotenone. n = 5. l Schematic diagram of experimental design. m Mice were injected LPS for 16 hours then treated with FFA-SS-luc and imaged using bioluminescence (FFA-luciferin+LPS). Densitometry of the bioluminescent images to determine fluorescence intensity. n = 4 for each group. The Mann–Whitney U test (two-tailed) was used and the Kruskal–Wallis test followed by Dunn’s multiple comparison post hoc test was used *P < 0.05 **p <0. 01. Source data are provided as a Source Data file (Mistry, et al., 2021).

In short, through the use of mouse models, they were able to show that inducible CD36 is required for free fatty acid uptake by HSCs during acute infection, allowing the metabolic transition from glycolysis towards β-oxidation.

“In conclusion, we report that adaptations in FFA uptake and FAO functionally support the hematopoietic response to bacterial infection. Furthermore, in doing so we provide a base for further studies investigating how benign and malignant stem cells in other tissues utilize FFA in response to cellular stress, and specifically whether the provision of FFA by adipocytes in the physiologic response to infection, is altered in individuals with particular vulnerabilities with respect to infection, including older people and those with obesity.”