SARS-CoV-2 has a rapid transmission rate and has truly tested the healthcare and research capacity of many countries. There has also been a joint effort into funding, developing and distributing COVID-19 vaccines worldwide which has led to an improvement in the management of COVID-19.

In a recent paper by Markewitz, et al., the researchers aimed to investigate and determine the levels of anti-SARS-CoV-2 antibodies in individuals who have been vaccinated with a mRNA COVID-19 vaccine six months after receiving their second dose.

Through the introduction of viral mRNA into the body, the reliance on the host cell for transcription of the mRNA leads to the production of a viral antigen that the immune system can recognize. In this present study, all participants were healthcare professionals who had received either the Pfizer BNT162b2 or Moderna mRNA-1273 vaccine.

This study reported several biomarkers of B-cell immunity against SARS-CoV-2 which were found to decrease in level following six months’ post-vaccination with the mRNA vaccine. They showed that the levels of anti-S1 IgG, anti-S1 IgA, in addition to neutralising antibodies decreased significantly between fourteen-days and six-months (Figure 1). 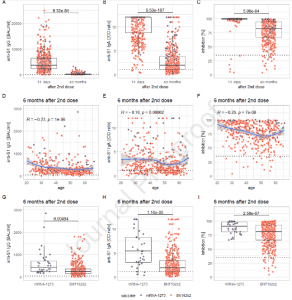 Figure 1: Panels A-C show the decrease of measured levels from 14 days to six months after the second dose of the vaccination for anti-S1 IgG (panel A), anti-S1 IgA (panel B) and inhibition via SNA (panel C); panels D-F depict the correlation of these markers at six months after the second dose with age (the blue line representing the conditional smoothed mean, calculated via locally estimated scatterplot smoothing (LOESS), with a gray 95 % confidence band around it); panels G-I show the comparison of levels of these markers between recipients of mRNA- 1273 and BNT162b2 at six months after the second dose. The individual measurements, plotted as dots, are color-coded according to the vaccination received (lilac: mRNA-1273; orange: BNT162b2) (Markewitz, et al., 2022).

This study further validates findings of other studies showing that vaccination with the Moderna mRNA-1273 vaccine elicits a significantly greater immune response when compared to the Pfizer-BioNTech BNT162b2 vaccine. This can be seen at fourteen days and six months’ post-vaccination.

“In conclusion, we found that markers of B-cell immunity against SARS-CoV-2 decrease significantly within six months after the second dose of the vaccination against SARS-CoV-2… Despite this, recipients of mRNA-1273 still exhibit higher levels of all examined markers than recipients of BNT162b2…At least in vitro, anti-S1 IgG seems to contribute significantly more to the inhibition of binding between S1 and ACE2 than serum anti-S1 IgA. Lastly, we did not see any induction of autoimmunity (as examined via ANA IIF) via the vaccination against SARS-CoV-2 six months after the second dose.”