A spinal cord injury, for instance, can cause damage to the central nervous system (CNS), which can lead to a lifelong loss of sensory and motor function, because the cut axons can’t grow again. Currently, there remains few alternative treatments available to aid individuals in regaining their motor skills. To provide long-term therapies that are effective, researchers are investigating techniques to allow the regeneration of damaged axons.

The central and peripheral nervous systems make up the two components of the human nervous system. Peripheral nerves have a greater capacity for self-repair and self-regeneration than the central nervous system. The connection between this self-healing and the nerve system’s inherent immune system is still poorly understood by scientists. How immune-related signalling pathways influenced neurons after damage and if they may directly promote axonal regeneration has recently been investigated.

In a recent paper, researchers used a murine model to simplify a few of the difficulties involved in the regeneration of damaged axons (Figure 1). They discovered that deleting the phosphatase-coding gene (PTPN2) in neurons can cause axons to grow again. It can speed up the process and increase the quantity of regenerated axons when paired with type II interferon (IFNƴ). The researchers also tried to determine the role of the signalling pathway IFNγ-cGAS-STING in the regeneration process of peripheral nerves. They found that the peripheral axons could directly modulate the immune response to enhance and promote self-repair after injury. 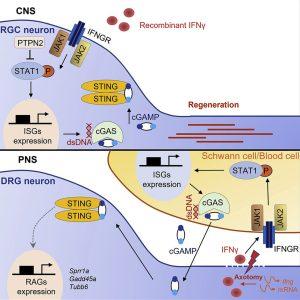 The latest work is shedding new light on the quest for therapeutic approaches for difficult illnesses like spinal cord injuries, with the merging of many signalling pathways being one potential approach.