Atypical B cells as biomarkers of renal complication in lupus patients

Systemic lupus erythematosus (SLE) is a chronic and complex autoimmune disease that induces constant inflammation and can affect different organs and tissues of our body including the skin and mucous membranes, joints, lungs, brain, blood vessels, and importantly, the kidneys.  Among the most serious complications of SLE are those that damage the kidneys and, if not treated in a timely manner, can lead to a condition named lupus nephropathy (LN), which usually causes long-term loss of kidney function, resulting in the need for constant dialysis and even transplantation of these organs. 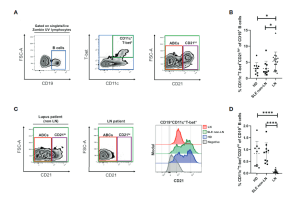 Figure 1: Alterations of ABCs and CD21 hi B cell subsets in lupus nephritis. (A) Gating strategy for the identification of the indicated B cell subsets in PBMCs, selected from singlets (FSC-A vs. FSC-H), lymphocytes (SSC-A vs. FSC-A) and live Zombie UV – gates. We then selected the CD19 positive cells, to gate over the double positive cells for T-bet and CD11c. Lastly, we segregate these cells by CD21 expression into CD21lo/- (ABCs) and CD21 hi. To depict this strategy, we present the data obtained from a representative healthy control. (B) Comparative analysis of ABCs frequencies (relative to CD19+ B cells) between cohorts of healthy donors (HD), non-LN lupus patients and LN. (C) Left: representative zebra plots from a non-LN vs. a LN patient to show lack of the CD21hi subset. Right: representative histograms to evaluate density expression of CD21 over the CD19+ T-bet + CD11c + cells. (D) Comparative analysis of CD21 hi frequencies (relative to CD19 + B cells) between the same cohorts. All comparative analysis were assessed by a Kruskal-Wallis test followed by a Dunn’s post-hoc test. *p ≤ 0.05, ****p ≤ 0.0001.

The diagnostic method for LN is kidney biopsy, which involves a small outpatient surgery, subject to the usual complications of any surgical procedure. To replace it or offer alternatives, multiple markers in blood or urine have been proposed, but most of them do not convince specialists to be used routinely in clinical practice.

For some years work in the group of Dr. José L. Maravillas-Montero has focused on the study of B lymphocytes, a type of blood cells that among other functions, are responsible for producing antibodies. These cells have a relevant role in the processes of SLE pathogenesis, so they decided to explore for the first time their possible implications in LN, beyond antibodies production. Among the great variety of B cells described, the so-called ABCs (age-associated B cells) stand out, which are apparently responsible for generating inflammatory processes in different diseases. Because of this, they undertook the task of measuring the numbers of these cells in blood samples from patients with different degrees of LN.

They found that ABCs are associated with the development of LN as their numbers increase in the blood of patients with active LN. In contrast, the number of these atypical B cells returns to their basal levels once patients receive treatment and recover, partially or completely from renal disease (patients in remission). Interestingly, the analyses showed the existence of another type of B cells, even odder but related to ABCs, which have a better capacity to discriminate patients who develop LN or to allow a better follow-up of their long-term treatment; these cells, which we refer to simply as CD21hi, disappear completely in the blood of patients with LN and recover after treatment, so they can be used as markers for monitoring therapeutic effectiveness and patient recovery.

In summary, their work demonstrates that both cell populations studied have a high potential as biomarkers, both for diagnosis and follow-up, in lupus patients who develop nephropathy; a characteristic that makes them relevant in terms of their possible application in clinical rheumatology.