Atopic dermatitis and the skin microbiome

The skin microbiome is characterised by various bacterial and fungal species which plays a great role in the skin biological stability.

Koh, et al., suggested that microorganisms like Staphylococcus hominis , epidermidis and lugdunensis  make biochemichal molecules that inhibit S.aureus proliferation on skin ; these molecules induced an immune regulation mechanism through the blockade of cytokines such as IL17, IL22 (Figure 1). Furthemore, other bacterial microorganisms like Cutibacterium acnes play a compounding role in atopic dermatitis pathophysiology ; this is seen through the inhibition of S.aureus and other pathological microorganisms development with bi-products formed from glycerol fermentation; In addition, supporting S.aureus proliferation as aggregation and biofilm formation facilitators. 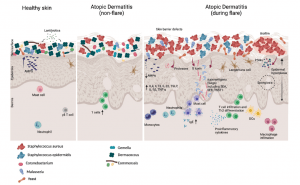 Figure 1: Crosstalk between skin and microbiome in healthy and atopic dermatitis conditions. The presence of commensals on the skin interacts with the host to establish a functional immune response and prevents the overgrowth of pathogenic microbes. On healthy skin (Left), there is high microbial diversity, which includes Dermacoccus and Corynebacterium as well as other commensals. Secretion of AMPs and production of lantibiotics by commensals shape the microbial community on healthy skin to prevent colonization of pathogens like S. aureus. On AD skin in a non-flare state (Middle), microbial dysbiosis occurs with a reduction of Dermacoccus and an increased abundance of Streptococcus and Gemella species. The skin of AD patients during flares (Right) is characterized by the overgrowth of pathogenic microbes such as S. aureus, and reduced microbial diversity. Biofilm production by S. aureus promotes its colonization and drives pathogenesis. Commensals including Dermacoccus are depleted. Epicutaneous defects can be exacerbated by genetic mutations of skin barrier proteins such as filaggrin, S. aureus virulence factors, and Th2 cytokines. S. aureus virulence factors including δ-toxin and superantigens trigger IgE-mediated mast cell degranulation, and the resulting increase in Th2 cytokines perpetuates AD. Concurrently, there is a marked reduction of AMPs expressed, leading to the overgrowth of pathogens such as S. aureus and Malassezia (Koh, et al., 2022).

Other microorganisms such as fungi (malassezia spp) plays an important role in the atopic dermatitis physiopathology through hyper activation of immune cells and cytokines extravasation.

Koh, et al., explained that new therapeutical insights developed by scientist is based on probiotics to restore and maintain the skin microbiome or genetic tools like CRISPR/cas9 to edit new specific microbes with antibiotic sensitivity by genetic engineering; Other forms of genetic manipulation could be introduced with  plasmids or phages. The aim of these therapeutics is to induce an immuno-regulation mechanism and neutralised the pathological effects of the microbiome.

Otherwise this possible role of skin microbiome in therapy of atopic dermatitis, microbes can be use in diagnostic classification or endotype establishment with clinical algorithm and biological analyses.