People living with the human immunodeficiency virus (HIV) are more susceptible to the development of skin and mucosal cancers, despite the improved systemic reconstitution of CD4+ T cells upon antiretroviral therapy (ART).  In a new study, Saluzzo, et al., has reported that the time of starting antiretroviral therapy may influence tumour development. A novel finding as the mechanism underlying the pathophysiology of chronic tissue-related immunodeficiency in HIV remains to be elucidated. 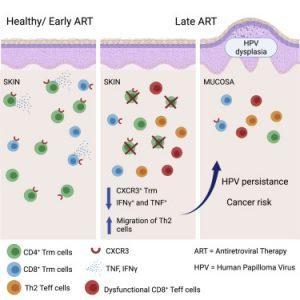 HIV targets, infects and destroys specific immune cells carrying the CD4 receptor on their surface. As the disease progresses, the CD4+ T cell populations starts to decline leading to the host becoming more susceptible to infection. Antiretroviral therapy (ART) is a form of treatment for HIV patients and functions by inhibiting viral replication subsequently reducing viral load deeming HIV undetectable in the blood. This is of great importance as the number of CD4+ T-cells in the blood increases and restores, relative, immunity for the patient. However, these patients are still vulnerable to developing skin cancer and malignancies, with specific reference to human papillomaviruses (HPV).

The group described a novel mechanism of tissue-specific dysregulation of the immune response in HIV patients, finding that differences exist in tissue-specific immune responses which is dependent on whether antiretroviral therapy was started immediately after diagnosis of HIV infection or if it was delayed. Resident memory T cells that preside in tissue and mucosa are essential for this process. Patients living with HIV (PLWH) only started ART a while after diagnosis, were found to have irreversible depletion of tissue-resident memory T cells in the skin and mucosa, irrespective of high numbers of CD4+ T cells present within the blood. This can be prevented if treatment is started promptly. Single-cell RNA sequencing in PLWH that received late ART treatment revealed a loss of CXCR3+ Trm cells and a tolerogenic skin immune environment. In addition, it was reported that lesion biopsies from HPV-induced precancerous tissue showed reduced CXCR3+ Trm cell frequencies in the mucosa in PLWH versus HIV− individuals. This is thought to be a factor in the development of HPV-related cancer as there is irreversible loss of CXCR3+ Trm cell frequencies.

These results have major implications in our understanding of the pathophysiological mechanisms of skin cancers especially in patients with immunodeficiency’s such as those with HIV or those undergoing organ transplantation.