An update on the Shock and kill HIV cure strategy 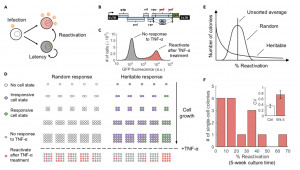 Figure 1. Heritable versus random reactivation response of HIV-1 latency to an external stimulus (A) HIV-1 infection results in two phenotypes: active replication (red) where the infected cells produce new virions and latent infection (gray) where infected cells do not produce virions. Latently infected cells can reactivate and initiate virion production through cellular and environmental fluctuations. (B) The cell line used in our investigation, the Jurkat latency model (JLat), is latently infected with a full-length HIV-1 gene circuit, with a deletion of env reading frame and a replacement of nef reading frame with a GFP element. (C) Histogram of single-cell GFP fluorescence (measured with flow cytometry) from a JLat 9.2 bulk culture, after a 24-h tumor necrosis factor alpha (TNF-a) treatment. TNF-a is a potent activator of the HIV-1 LTR promoter and was administered at 10 ng/mL concentration. The histogram shows that there is a distinct bimodal distribution of response to TNF-a perturbation within a clonal population of JLat. (D) We propose the following Luria-Delbru ̈ ck experimental design to investigate if single-cell JLat response to TNF-a perturbation is random or heritable. A clonal population of JLat 9.2 was sorted into single cells using FACS and cultured individually into colonies. The colonies were subject to 10 ng/mL of TNF-a and the percentage of reactivated cells was measured using flow cytometry after 24 h of treatment. If JLat responds to TNF-a randomly, their responsiveness to TNF-a is determined at the time of TNF-a addition and thus would show low colony-to-colony variation. In contrast, if the response is heritable, then colony behaviors would be influenced by the parent cell resulting in large variations between colonies.
(E) The distribution of reactivation percentage would be centered on the unsorted average if the response is random, whereas the heritable model will result in a wide, skewed distribution for reactivation percentage across colonies.
(F) Histogram of reactivation percentage of 14 different JLat 9.2 colonies after a 24-h TNF-a treatment. Colonies were cultured for 5 weeks after FACS and were grown from single cells sorted from a bulk JLat 9.2 clonal population. The resulting distribution coincides with the heritable response prediction and confirms that JLat cells possess heritable memory of responsiveness to TNF-a perturbation. Inset: The noise in percent reactivation (quantified using the coefficient of variation CV) is significantly higher than the control noise floor as measured by fluctuations in percent reactivation across unsorted JLat populations (p < 0.005). Error bars in the inset represent the standard error of CV. (Source: Lu et al. 2021)

In a recent study, Lu and colleagues investigated whether reactivation of individual latent cells occurs stochastically in response to LRAs or is a deterministic outcome of an underlying cell state. Using Jurkat latency model of HIV-1 (a cell line of Jurkat T cell with a single integration site of the HIV-1 GFP+ genome) and activation of HIV-transcription using TNF, they showed responsiveness (expression of Viral) RNA is inherited and maintained in proliferating cells. However, some of the proliferating cells do become irresponsive, resulting in the maintenance of the viral reservoir. Further, results from mathematical modelling suggest that responsiveness to LRAs is maintained for weeks to months. Thus designing shock- and kill strategies based on multiple rounds of LRA treatment may be more effective than a single-round, single-LRA treatment.

Though this study primarily focused on the shock part of the shock- and kill- strategy, they do provide cues for how this strategy (still in experimental) phase can be improved.