In a promising new study, researchers from the University of Leicester have developed a new approach to potentially treating and vaccinating against Alzheimer’s disease (AD). The new approach will focus on a soluble and different form of the amyloid beta (Aβ) protein plaques in the brain, the protein commonly associated with Alzheimer’s disease. Bakrania, et al., reported that the antibody-based treatment and the protein-based vaccine reduced Alzheimer’s symptoms in murine models of the disease (INTERESTING READ: Vaccines for Neurodegenerative Diseases).

AD is a progressive neurodegenerative condition characterised by the presence of extracellular deposits of the amyloid-beta (Aβ) protein. It is known that the amyloid plaques are representative of the common hallmarks of AD, however, the soluble oligomers have been shown to better correlate with the clinical pathology. The Aβ peptide exists in several forms, including full-length Aβ1-42 and Aβ1-40 – and the N-truncated species, pyroglutamate Aβ3-42 and Aβ4-42, which appear to play a major role in neurodegeneration. In this study, researchers reported the discovery of a specific and unique conformational epitope in the N-terminal region of Aβ, which may be a target of a new approach for active and passive immunization against AD. The team previously identified a murine antibody (TAP01) (Figure 1), which binds specifically to soluble, non-plaque N-truncated Aβ species. As a result, Bakrania, et al., seem to have successfully developed a unique and novel AD vaccine which is significantly different from other vaccines or antibodies in clinical development. 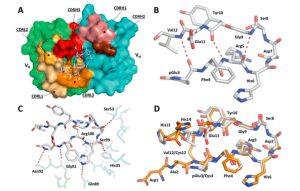 Figure 1: Structure of the TAP01-Aβ pE3-14 complex. A A surface representation of the TAP01 antibody paratope, with the VH and VK domains coloured cyan and green respectively, and the individual complementary determining regions (CDR) highlighted. The conformation and location of the bound AβpE3-14 peptide is shown as a white sticks representation of its covalent structure. B The striking pseudo β-hairpin conformation of the TAP01 bound pE3-14 peptide, which is shown as a covalent sticks representation with stabilising intramolecular hydrogen bonds highlighted. C A detailed view of the TAP01-AβpE3-14 interface, with the bound peptide and interacting antibody residues shown as covalent sticks. TAP01 residues are shown in cyan and green for the VH and VK domains, respectively. Intermolecular hydrogen bonds between AβpE3-14 and the antibody are highlighted by dashed lines. D An overlay of the highly similar TAP01-bound conformations seen for cyclised Aβ1-14 and AβpE3-14, which are shown as orange and white covalent sticks, respectively (Bakrania, et al., 2021).

The Aβ protein exists as a flexible, string-like molecule in solution, which possesses the ability to join together to form fibers and plaques in the brain which subsequently lead to AD. It is known that a high proportion of these plaques exist in the brain and become truncated. It has been postulated that these forms are key to development and progression of the disease.

In this study, they adapted the antibody, TAP01, to avoid a response from the human immune system. In short, they were able to neutralize the truncated forms of soluble Aβ, relinquishing its ability to bind either to normal forms of the protein or to the plaques. They further investigated the human form of this antibody, named TAP01_04, and how it binded to the truncated form of Aβ. It was reported that the TAP01 family antibodies uniquely bind to a novel, pseudo β-hairpin conformation of the N-terminal region of Aβ, which is not related to any other Aβ epitope, conformation, or aggregate structure described so far.  A novel structure, the team then engineered this region of the protein in order to stabilise the hairpin structure and thus bind to the antibody in the same way (stabilized cyclic form of Aβ1-14 [N-Truncated Amyloid Peptide AntibodieS; the TAPAS vaccine]). It was thought that the engineered form of Aβ could potentially be utilised as a vaccine, to provoke and immune response to produce TAP01_04 type antibodies in humans.

Testing this engineered protein in vivo, they found that mice receiving the engineered protein produced TAP01 type antibodies (Figure 2). Subsequently they tested both the TAP01_04 (Human) and the engineered ‘TAPAS’ vaccine, in two different murine models of AD. Using clinically relevant techniques, they found that both the antibody and the TAPAS vaccine helped to restore neuronal function through the reduction in Aβ-plaque formation (Figure 2), an increase glucose metabolism in the brain (Figure 3), memory rescue and inhibited neuron loss. 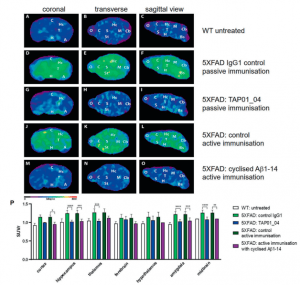 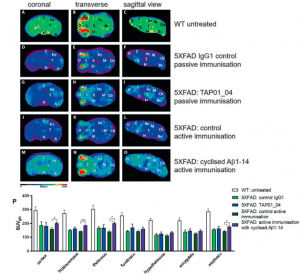 Still in its infancy, these results have great promise and if they were to be replicated in clinical trials in humans, then it would have massive implications both for the treatment of AD and AD prophylaxis (MORE: Immunotherapeutic Approaches for Alzheimers Disease).

Journal article: Bakrania, et al., 2021. Discovery of a novel pseudo β-hairpin structure of N-truncated amyloid-β for use as a vaccine against Alzheimer’s disease. Molecular Psychiatry.