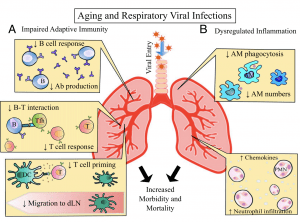 Aging impacts the immune response to
viral respiratory infections. The consequences of aging on the immune response against respiratory viruses can be broadly categorized into (A) impaired adaptive immunity and (B) dysregulated inflammation. (A) Aging reduces
the B cell response and the generation of protective Abs against the virus. The reduced B cell response is in part due to the reduction in B–T interaction. Both CD4+ and CD8+ T cell responses are also dampened with aging. DC
migration to the dLN and priming of T cells are impaired. (B) Aging causes dysregulated inflammation in the lungs during respiratory viral infections. Increased levels of chemokines (IL-8) lead to increased recruitment of neutrophils (polymorphonuclear neutrophils [PMN]). Aging causes reduced numbers of AMs and impairs their ability to phagocytose apoptotic neutrophils and debris.

Chen and colleagues reviewed findings on how aging alters immunity to respiratory viral infections with the aim of suggesting potential mechanisms of age-enhanced COVID-19 mortality. They present evidence that indicated that influenza infection is associated with increased monocyte infiltration in the lung, which leads to increased levels of IL-6 and IL-β, as well as reduced T cell and B cell responses. Reduced adaptive immune responses in older individuals (> 65 years) have been attributed to the reduced capacity of antigen presentation resulting in poor T and B cell priming. They also described data from studies on respiratory syncytial virus infection, which showed that “aging leads to upregulation of 113 of the total 373 significantly regulated immune-modulating genes in the lung, suggesting that increased morbidity with aging during RSV may be partially due to an elevated basal inflammatory response.” These findings highlight the roles of inflammaging (increased hyperinflammation) and immune senescence (dysfunctional adaptive immunity) in increased susceptibility of older people to respiratory infections.
They conclude that increased susceptibility of severe COVID-19 in older individuals is not due to impaired viral control but rather due to dysregulation of innate immunity which results in increased inflammatory responses. Thus “targeting innate immunity may represent an effective therapeutic strategy to reduce suffering in the general population and in older people infected with SARS-CoV-2”.