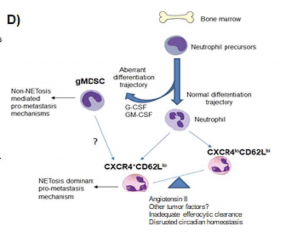 Inflammation is critical for the metastatic process and is sustained by tumor cells through mobilisation of granulocytes and other myeloid cells from the bone marrow. One described mechanism of metastasis-supporting neutrophil-driven inflammation is the modulation of myeloid differentiation to generate myeloid-derived suppressor cells (MDSCs). Aged neutrophils, characterized by upregulation of CXCR4 and downregulation of CD62L, are a highly inflammatory subset designated to enhance immunologic defense.

Since nothing is known about aged neutrophils in cancer biology and mature neutrophils in the circulation are considered to be heterogenous, Peng et al. examined how metastatic cancers regulate mature neutrophils (non-granulocytic MDSC). To this end, they induced tumor growth in mice by injecting cells from breast cancer or melanoma cell lines. Additionally, tumor cells were co-cultured with the aforementioned cancer cell lines. The neutrophil populations were then analyzed by flow cytometry and neutrophil functions such as production of reactive oxygen species (ROS) and neutrophil extracellular trap (NET) formation were assessed.

Aged neutrophils (CXCR4hiCD62Llo) promote tumor migration and metastasis as adoptive transfer of aged neutrophils significantly enhanced metastasis of breast and melanoma cells to the liver. These neutrophils are prone to form NETs and release several metastasis-promoting factors such as ROS, vascular endothelial growth factor and metalloproteinases (MMP-9). Interestingly, the liver metastases were greatly reduced by degradation of NETs by DNase1 or inhibition of either neutrophil elastase or MMP-9.