A novel inhibitor of dengue virus

In a recent study conducted by researchers at the Rega Institute for Medical Research, KU Leuven, have identified and developed an ultrapotent inhibitor of the dengue virus (DENV), which causes the tropical disease known as dengue (Read more: Human models to advance dengue vaccine development). This study was in collaboration with Janssen Pharmaceutica.

A top ten global health threat, an estimated 96 million individuals go on to develop and suffer from dengue disease. This incidence has increased approximately 30-fold over the past 50 years. Symptoms include: a high fever and severe muscle and joint pain whilst some patients may suffer from subcutaneous bleeding or capillary leakage. Caused by the mosquito-borne dengue virus, the disease is found in nearly all (sub)tropical regions, occurring most prominently in Latin America and Asia. The vaccine Dengvaxia, which is approved in a number of countries for individuals aged ≥9 years, is only recommended for those with previous dengue exposure (Risks of Incomplete Immunity to Dengue Virus).

Currently, there are no preventative antiviral agents used for the treatment of dengue, and the development of pan-serotype DENV inhibitors has proven challenging. There is an urgent need for potent and safe pan-serotype dengue antivirals for the treatment and prophylaxis of infections with DENV. In this present study, Kaptein, et al., reported a highly potent, pan-serotype DENV inhibitor, JNJ-A07, targeting NS4B. It was shown that the antiviral molecule is effective against all known dengue variants and could be used for therapeutic and prophylaxis purposes.

In the present study, in short, a unique mechanism of action was identified and it was reported that JNJ-A07 prevents the formation of the viral replication complex by blocking the interaction between two viral proteins (NS3 and NS4B), thus revealing a previously undescribed mechanism of antiviral action (Figure 1). Through the inhibition/blocking of this interaction, the virus will fail to replicate its genetic material leading to a failure to produce new viral particles. It must be noted that JNJ-A07 prevented the formation of the NS3–NS4B complex, but did this inefficiently when NS4B carries mutations associated with drug resistance. 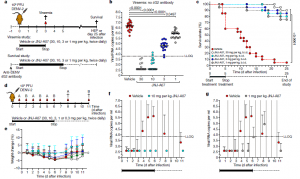 Figure 1: In vivo efficacy of JNJ-A07 on viraemia and survival in a prophylactic setting. a, Schematic of the viraemia and survival studies using AG129 mice. b, c, Effect of JNJ-A07 on viraemia on day 3 after infection (b) and on survival (c) in mice treated twice daily with 30, 10, 3 or 1 mg per kg JNJ-A07 compared with vehicle-treated mice. Treatment started 1 h before infection. In the survival study, mice received an anti-flavivirus antibody 1 day before infection. Data are from two independent studies with n = 8 (viraemia) or n = 10 (survival) mice per group. d, Schematic of the in vivo kinetics study. Each treatment group was subdivided into groups A and B (n = 8, per group) for blood collection on alternating days. e, Weight curves (mean values ± s.d.) of AG129 mice in the different treatment groups. Colours of the dots represent the different dosing groups (n = 8, per group), as specified in b; green dots represent the 0.3 mg per kg dosing group. f, g, Inhibitory effect of JNJ-A07 on viraemia in mice treated twice daily with 10 mg per kg (n = 8) or 1 mg per kg (n = 8) compared with vehicle-treated mice (n = 16). For the complete figure, see Extended Data Fig. 8. Treatment started 1 h before infection. Data (median ± s.d.) are from two independent studies. Undetermined Ct values were imputed at a Ct value of 40 (which is the LOD), corresponding to 2.6 log10 viral RNA copies per millilitre. For two-sided statistical analysis, the Kruskal– Wallis test (viraemia) or the Fisher’s exact test (survival) was used. P values were adjusted using the Holm’s multiple comparisons correction method. The mean AUC value and 95% CI was determined for f and g. In case CIs did not overlap, groups were considered to markedly differ. For b, f and g, results are shown as log10-transformed values. HEP, humane end point; LLOQ, lowest level of quantification (Kaptein, et al., 2021).

Following additional experiments using an in vitro mouse/rat model, JNJ-A07 presented a favourable pharmacokinetic and safety profile in mice and rats and exerted strong potency in DENV-2 infection mouse models (Figure 2). In addition, the inhibitor was highly efficient in reducing viral loads (even at low doses) and virus-induced disease. Importantly, even when the start of treatment was delayed for several days after infection, a rapid and marked reduction in viral load was observed. The authors reported that, JNJ-A07 and/or close analogues with comparable safety, pharmacokinetics and potency may have the potential to be effective in both prophylactic and therapeutic settings against DENV infections in humans. 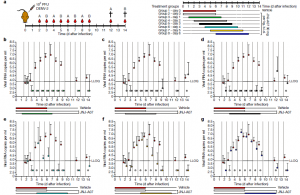 Figure2: In vivo efficacy of JNJ-A07 on the kinetics of DENV replication in a therapeutic setting. a, Schematic of the in vivo kinetic studies in which treatment was started on various days after DENV-2 challenge (groups 3–8), while in the control groups (vehicle and JNJ-A07), treatment was started on the day of infection (groups 1 and 2, respectively). Each treatment group (n = 8, per group) was subdivided into groups A and B (n = 4, per group) for blood collection on alternating days. b–g, The inhibitory effect of JNJ-A07 on viraemia with the start of treatment at various time points after infection in AG129 mice treated twice daily with 30 mg per kg for 6 consecutive days. In the delayed-treatment groups (groups 3–8), treatment with JNJ-A07 was started on day 1 (b), day 2 (c), day 3 (d), day 4 (e), day 5 (f) or day 6 (g) after infection. As controls, two groups of mice received treatment on the day of infection: group 1 (vehicle) and group 2 (JNJ-A07). Data (median ± s.d.) are from a single experiment. Results shown as shown as log10-transformed values. Undetermined Ct values were imputed at a Ct value of 40 (which is the LOD), corresponding to 2.6 log10 viral RNA copies per millilitre. The mean AUC value and 95% CI was determined for each group. In case CIs did not overlap, groups were considered to substantially differ (Kaptein, et al., 2021).

“In conclusion, we demonstrated that blocking the interaction between two viral proteins (NS3 and NS4B) results in strong antiviral activity. The NS3–NS4B interaction represents a promising target for the development of pan-serotype DENV inhibitors with a high barrier to resistance. The strong potency warrants further development of this class of compounds.”

For a webinar on dengue, follow this link – Global Immunotalks Highlight: Immune responses after dengue virus infection: friend or foe?