A new target for TB treatment with great potential

Beites, et al., have investigated the function and role of an Mtb enzyme that has never been studied in detail. They reported that the enzyme is essential for Mtb’s breakdown of free fatty acids which in turn lead to energy generation and the molecular building blocks for growth and survival. EtfDMtb, the enzyme reported and its deletion lead to the complete reduction of Mtb infection in mice (Figure 1). 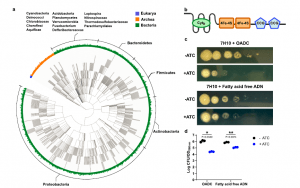 Figure 1: EtfD is a membrane protein possibly involved in Mtb’s energy metabolism. a Rootless phylogenetic tree with species containing members of COG0247 according to the database of the webtool EggNog. The inner colored ring corresponds to life domains, while the outer ring refers to bacteria phyla. b Domain architecture of EtfD based on the algorithms of HHPred and Xtalpred. Cytb cytochrome b, CCG cysteine-rich domain. c Spot assay on solid media with an EtfD-TetOFF strain, where protein levels are controlled by anhydrotetracycline (ATC). Serial dilutions (106 down to 1 bacteria) were incubated for 14 days. These results are representative of three independent experiments. d Quantification of spot assays (c). This quantification aggregates the data from the three independent experiments. To quantify the spot assays, we picked the first dilution where isolated CFUs could be counted and divided it by the optical density (OD) of the corresponding bacterial suspension. The discrepancy between the OD of the bacterial suspension and the corresponding CFUs, which is due to sensitivity to lipids in the solid media, is reflected by this ratio. Data are averages with individual data points depicted. Error bars correspond to standard deviation. Statistical significance was assessed through paired two-tailed t-test. *P < 0.05; **P < 0.01 (Bietes, et al., 2021).

This enzyme may be used as a potential drug target for the treatment of TB. Through silencing of the enzyme, it not only inhibits Mtb but also has a detrimental and toxic effect on the mycobacterium (Figure 2).

Figure 2: EtfD is essential for growth and survival in vivo. a Growth and persistence of wild type Mtb, ΔetfD and the complemented mutant in mouse lungs and spleens. Data are CFU averages from four mice per time point and are representative of two independent experiments. Error bars correspond to standard deviation. “Comp” stands for complemented. L.O.D. stands for limit of detection. b Gross pathology of lungs infected with wild-type Mtb, ΔetfD and the complemented mutant at day 56 (Beites, et al., 2021).

Through observations of Mtb proteins, the researchers found that two closely resemble two human metabolic enzymes called ETF-α and ETF-β. The latter are known to be involved in the metabolism of fatty acids, and their mutation can cause metabolic disease. Beites, et al., discovered two Mtb proteins, EtfAMtb and EtfBMtb, which together form an enzyme that works won conjunction with EtfDMtb, to carry out a similar metabolic function for Mtb i.e. beta oxidation of fatty acids.

Mtb remains a serious global public health threat and has proven to be an incredibly resilient pathogen which grows slowly and evades the immune system within the immune system itself. It is possible to cure Mtb infection with antibiotics, however it requires a lengthy treatment regimen which often is unsuccessful due to a patients inability to complete the course for several reasons. This being said, multi-drug-resistant Mtb strains have become a major medical problem in many parts of the world, and there is an urgent need for new methods of treating and fighting this pathogen. This present study by present one possible solution.