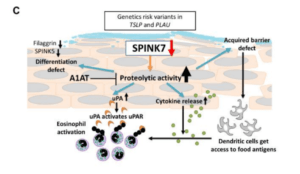 A summary of the effect of barrier gene deficiency on SPINK7 expression and a model of SPINK7 pathway in EoE. (Taken from supplementary fig 10.)

The classic model of allergic disease supports the IgE dogma of allergen sensitization and exaggerated immune response after re-exposure. Nevertheless, clinical findings suggest that the immune mechanisms are far more intricate. The lack of response to Anti-IgE therapies in certain allergic diseases and non-predictable allergen interaction in high-risk patients indicate us that a better understanding is needed to improve outcomes in allergic diseases.

Eosinophilic esophagitis (EoE) is a rare, chronic, food-driven inflammatory disease of the esophagus. Clinical presentation varies through different ages and may include feeding problems, vomiting, abdominal pain, and dysphagia, causing an important decrease in life quality of affected individuals who in may require systemic steroids to control the symptoms. Despite being considered as an allergic disease triggered by food antigens, the mechanisms of its origin and progression are still unclear and intensive research is conducted to address this knowledge gap. Since diagnosis requires biopsies with the identification of esophageal eosinophilia, the relative availability of human samples is an advantage for translational research.

Using RNA sequencing data from esophageal biopsies, Azouz and collaborators found that a serine peptidase inhibitor SPINK7 is nearly completely undetectable in comparison to healthy controls. Guideline-directed EoE treatment reinstated SPINK7 expression and positively correlated to key epithelial barrier gene expression. To further demonstrate SPINK7 role in EoE, the researchers used an air-liquid interface culture of esophageal epithelial progenitor cell lines that mimics esophageal architecture. SPINK7 silencing resulted in the loss of barrier function and inadequate epithelial differentiation. They found that SPINK7 silencing is associated with higher production of proinflammatory cytokines, including a 12-fold increase in IL-8, a potent chemoattractant of neutrophils and eosinophils, and also stimulated the release of TSLP, a critical cytokine in the development of type 2 immune responses. Under the hypothesis that suppressing the elevated proteolytic activity caused by the lack of inhibition by SPINK7 will result in reversal of its effect, a broad serine protease inhibitor, alfa-1 antitrypsin (A1AT) was administered in the ALI system. Researchers demonstrated that A1AT ameliorates the epithelial impairment in vitro, at least in part.

These results obtained by the team led by Dr. Marc Rothenberg from Cincinnati Children’s Hospital Medical Center suggests that local fluctuations in SPINK7 expression regulate immune responses by hampering the epithelial barrier and priming epithelial cells to secrete immunomodulatory cytokines. As in Inflammatory Bowel Disease and atopic dermatitis, EoE should be considered as a complex disease with a disordered interplay between the epithelial barrier, innate and adaptive immune responses together with the composition of the microbiota.