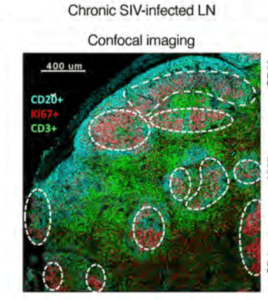 CD8 T cells have been shown to be one of the main cellular mediators of HIV/SIV control. One of the major sites of HIV/SIV viral replication and persistence is lymph node. Understanding the dynamics of CD8 T cell anti-HIV immunity in the lymph node could aid in the development of future cure strategies.

Researchers hypothesised that increased fCD8 T cells could be due to high viral replication, as CD8 T cells have been shown to be the main mediators of viral control in. To their surprise fCDC8 T cells were not preferentially colocalised with SIV-RNA+ cells using both confocal microscopy and histocytometry. Suggestin that though SIV replication is necessary for fCD8 accumulation, it may not be sufficient  to induce T cell trafficking. Using an Africa green monkey*- SIV infection models, researchers showed  that activation of cells plays an important role in fCD8 T cells trafficking. Additionally, this activation was also associated with increased proportions of CXCL10 expressing monocytes. Majority of CD8 T cells observed in the lymph node expressed high levels of CXCR3, the receptor for CXCL10. This suggest a potential mechanised of CXCL10-CXCR3 mediated attraction of fCD8 T cells.

In summary, this results validated the use of non-human primate models to study the  dynamics of fCD8 T cells in the lymph node during SIV infection. Additionally, they demonstrated a potential role of activation and inflammation in accumulation of cytotoxic SIV-specific fCD8 T cells. Justifying the exploration of fCD8 T cells as one of the avenues for achieving HIV cure.