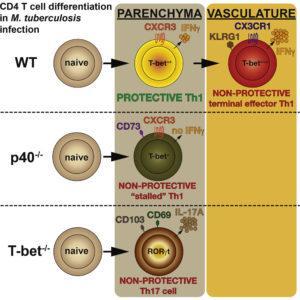 Tuberculosis (TB) is the 9th leading cause of death world-wide. Bacille Calmette-Guérin (BCG), the only licensed vaccine against TB, is effective at protecting infants and young children against severe TB, but provides poor efficacy in adulthood.  This stresses the need for new highly effective TB vaccines, a great challenge in the TB field as no correlate of protection currently exists.

Studies have shown that CD4 T cells, particularly those that produce IFN-γ, play a vital role in the control of Mycobacterium tuberculosis (M.tb), the etiological agent responsible for TB. However, induction of IFN-γ expressing CD4 T cells by current TB vaccine candidates does not protect against TB. Therefore to develop an effective TB vaccine, we need a better understanding of protective M.tb-specific CD4 T cells beyond cytokine production, in particular CD4 T cell functions at the site of infection.

Researchers led by Daniel Barber from the National Institutes of Health (USA) aimed to determine factors that regulate the generation of protective and non-protective M.tb-specific CD4 T cells, particularly the role of T-bet (transcription factor) and IL12/23p40 (cytokine dimer), molecules essential for the generation of Th1 cells, and associated with generation of terminal effector T cells when expressed at high levels.

The team showed that KLRG1 expression alone was not enough to define cells that have limited control of M.tb infection. M.tb-specific KLRG1+ CD4 T cells that specifically reside in the lung vasculature but not KLRG1+ CD4 T cells found in the lung parenchyma have limited ability to control M.tb infection. Salin et al., demonstrated that T-bet and IL12/23p40 are essential for the generation of lung vasculature residingM.tb-specific KLRG1+ CD4 T cells that produce high levels of IFN-γ (terminal effector cells). Down regulation of either T-bet or IL12/23p40 molecule resulted in the generation of non-protective parenchyma residing CD4 T cells, an observation attributed due to lack of IFN-γ expression. Finally, they demonstrated that while T-bet expression is essential for Th1 T cell differentiation, it is not required for the T cell migration to the lung, in fact lack of T-bet expression by T cells was associated with accumulation of T cells in the parenchyma.