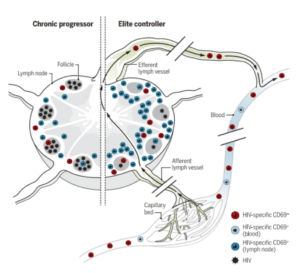 Human immunodeficiency virus (HIV) is a virus that causes the condition acquired immunodeficiency syndrome (AIDS). The virus attacks CD4+ T cells, making it harder to fight off other infections such as Tuberculosis among others. HIV infection induces adaptive HIV-specific CD8+ T cells which can exert selection pressure on the virus, forcing it to evolve to evade immune recognition and resulting in a lower level and semistable viral set point. The level of the early viral set point is highly predictive for long-term disease outcome.

One of the most important question in HIV immunology is how CD8+ T cell contribute to immunity against HIV. Despite the fact the HIV replicates in lymphoid tissues, most of CD8+ T cell data come from peripheral blood samples, making interpretation difficult.  On the other hand, resident memory T cells (Trm), a subset that resides in non-lymphoid tissues, has been identified as an important effector in the frontline tissue defense as they eliminate pathogens efficiently. It has been suggested that Trm like cells could execute the same role in the lymph nodes (LN) but adequate studies are lacking.

Buggert and colleagues obtained lymphoid tissues from HIV infected individuals and carried out comprehensive analysis of the CD8+ T cell population. They report a subset of CD8+ T cells in LN that shows a Trm phenotype demonstrated by phenotypic, transcriptional, epigenetic and functional experiments. This cell population is non-circulating and take residency in LN late after extensive cycling in response to antigen. Furthermore, HIV elite controllers (non-treated HIV infected individuals that maintain a very low viral load) have high quantities of HIV specific Trm at LN.

HIV research has been largely limited by our lack of a complete insight of the human immune response after infection. As it has been constantly suggested by recent studies, investigations focused on the blood compartment may be insufficient to grasp the complexity of the biological response against pathogens. Coupling advanced cellular characterization techniques with a well-designed tissue sampling protocol in HIV infected individuals that included tonsils, spleen and thoracic duct lymph, this study brings some light in understanding the role of Trm in HIV immunology. Better comprehension of HIV immunosurveillance could result in new approaches for therapies against HIV infection.