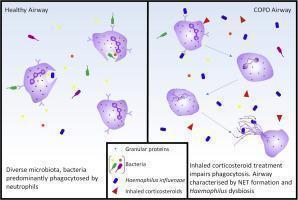 Chronic Obstructive Pulmonary Disease (COPD) is an umbrella term used describe a group of lung diseases such as emphysema, chronic bronchitis, among others, and is primarily caused by cigarette smoking. Cigarette smoke has been observed to cause neutrophilic inflammation and impair anti-bacterial defences.

Neutrophils contribute to airway damage in COPD patients by releasing proteases and reactive oxygen species which can increase mucus production and mucocilliary dysfunction. As such, neutrophilic inflammation is a one of the major characteristics of COPD.

One of the anti-bacterial activities of neutrophils is neutrophil extracellular trap (NET) formation. NET is a process by which neutrophils release DNA (uncondensed chromatin and histones), neutrophil elastase and other granule products to trap bacteria. Recent data suggests that NET-associated neutrophil elastase is associated with COPD severity, however the patho-physiological relevance of NET has not been identified.

A collaboration between researchers from United Kingdom and Spain, aimed to determine correlations between NET release and disease severity, airway microbiome and neutrophil function. Researchers utilised sputum samples from COPD patients across a spectra of disease severity to measure NET concentrations. Since no gold standard for detection of NET activity in biological samples exists, Dicker et al. used 3 quantification methods: myeloperoxidase-DNA ELISA, sputum based detection of DNA-elastase and histone-elastase complexes.

This research highlights the potential use of NET as a biomarker for COPD as well as the need for further research determines the exact mechanisms by which NET causes microbiome dysbiosis.