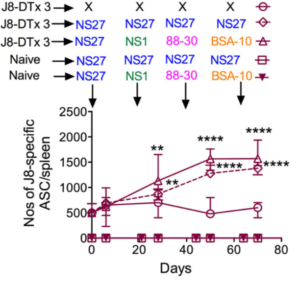 Group A streptococcus (GAS) causes a broad spectrum of diseases ranging from throat infections to rheumatic heart disease. An estimated 18 million individuals suffer from GAS diseases worldwide, of which approximately 500 000 cases are fatal. Natural infection inefficiently induces immunity against GAS, taking an estimated 20 years to develop. This slow acquisition of immunity has been attributed to antigenic diversity of  the GAS M-protein and bacterial mediated evasion of innate host immunity.

Immune responses against the M protein are not long lasting and have been observed to be strain specific. However, a conserved epitope in the M protein termed “J8”, that is not naturally presented to immune cells has been identified. Researchers have shown the vaccine induced J8-immune responses are protective against multiple GAS strains.

Researchers from the University of Queensland in Australia, aimed to determine if vaccine induced J8-specific memory B cells are boosted upon infection, and whether sequential infection would increase the breadth of GAS-specific immunity.

Pandey et al., showed that J8-specific antibodies (Ab) were only induced upon vaccination, and sequential GAS infection was associated with a reduction of skin GAS bacterial burden and significant induction of J8-specific Ab-secreting cells. However, sequential GAS infection did not boost J8-specific Abs, suggesting that J8 vaccination induces saturating titres of J8-Abs. This finding confirms that the J8 epitope is not naturally presented during infection, however infection can boost vaccine induced J8-specific memory cells. Additionally, increased breadth of GAS immunity against various strains, improved with sequential infection. Where protection against the hypervirulent strain BSA-10, only occurred when J8-DT vaccinated mice were exposed to multiple strains of GAS after vaccination compared to mice that were only exposed to BSA-10.

In summary this study, illustrates that suboptimal vaccine induced immunity can be boosted and improved by natural sequential infection, resulting in increased breadth of the immune repertoire.

Reference: The current evidence for the burden of group A streptococcoal diseases World Health Organisation.