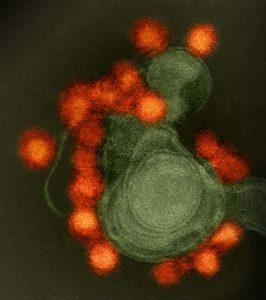 Mucosal associated invariant T cells (MAITs) are a population of innate-like T cells that represent 1-10% of T cells in the blood of healthy adults. MAITs are a unique subset of T cells that recognise riboflavin (vitamin B2) metabolites via the MR1 molecule. As such MAITs have been shown to play an important role in immune responses to bacterial pathogens. MAITs can also be activated in a TCR-independent mechanism via IL-12 and IL-18, and have been observed to respond to pathogens that lack a riboflavin pathway such as viruses.

Dengue (DENV) and Zika (ZIKV) virus are flavivirus sp. transmitted by Aedes aegypti (mosquito). ZIKV infection was previously understudied, and was thought to cause mild viral illness. The recent geographical expansion of ZIKV particularly in the Americas where DENV is endemic, has resulted in increased interest in ZIKV, as it has been associated with Guillain-Barré syndrome and fetal malformations.

The role of unconventional T cells, such as MAITs, in DENV and ZIKV infection has been understudied. Paquin-Proulx et al., aimed to investigate MAIT function in response to DENV and ZIKV infection. Researchers utilised samples from study participants in Brazil with confirmed DENV infection, whom recovered. Similar to other infections, DENV infection was associated with a decrease in the number of MAITs (defined as CD3+CD161+Va7.2+) in the periphery (blood). Similar to conventional CD8 T cells, Acute DENV infection was associated with increased expression of activation markers CD38 and HLA-DR by MAITs cells compared to convalescent infection. Surprisingly,IFN-γ production by MAITs in response to in vitro DENV stimulation was very low and no difference in functional (IFN-γ) responses were observed between acute and convalescent DENV infection. This suggests that IFN-γ alone may not be the best the functional readout for MAIT function in DENV infection. ZIKV in vitro infection unlike DENV induced robust functional (IFN-γ) responses by MAITs, that was independent of MR1 signalling and dependent on activation by IL-12 and IL-18. Induction of functional MAIT responses by flavivirus, suggests a potential role of unconventional T cells in the control of ZIKV (and DENV) infection, which requires further studies.