Is CD153 essential for M.tb control ? 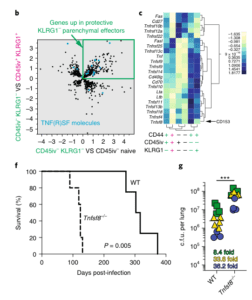 CD4 T cells, particularly those that express IFN-γ have been shown to be essential for control of Mycobacterium tuberculosis (M.tb) infection in both animal models and humans. However, numerous studies have shown that IFN-γ expression by CD4 T cells is not the sole mediator of host protection.