Initial Immune Responses to TB in the Human Lung 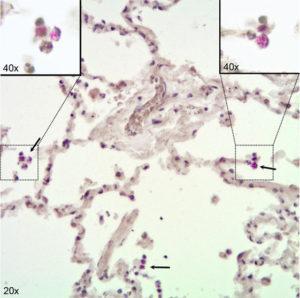 Early immune responses to pathogens in the lungs play a role in the clearance or establishment of an infection. Our understanding of immunity in the human lung has increased over time but is still limited, partly due to the difficulty of obtaining relevant cells that represent the complex cellular architecture of the lung. While animal models such as mice have been used to understand immune responses in the lung, the clean conditions in which they are kept do not reflect the constant environmental exposure that humans undergo.

Some individuals can clear inhaled Mycobacterium tuberculosis (Mtb) from the lungs before establishment of stable infection. Investigating lung immunity against tuberculosis (TB) is important for the design of efficacious vaccines and therapeutic drugs. Using human lung tissue explants, researchers at the Max Plank Institute for Infection Biology investigated the primary biological responses of epithelial cells (ECs), alveolar macrophages (AMs) and innate lymphoid cells (ILCs) upon Mtb exposure. By looking at the gene expression of cytokines and chemokines in these cells, they found a strong induction of proinflammatory response with IL1B and IL8 being the most induced in all myeloid cell types. They also observed an upregulation of signaling in T cells and activation through IL15, IL23 and TNF. However, significant induction of IL17 gene expression was not observed. These proinflammatory responses were independent of the virulence of Mtb strains that were used for infecting lung tissues.

Additionally, they extracted and classified ILCs based on expression of surface markers and key transcription factors. Mtb stimulated ILC1s and ILC2s from the infected lung tissue upregulated TNF production and IL2RA gene expression. ILC3s also upregulated their main response factors, GM-CSF and IL22, which are usually involved in phagocytosis and antimicrobial peptide production.

This study provides a first look at early immune responses to Mtb in human lung tissues and sets the stage for more indepth investigation of markers that mediate resistance to Mtb infection using human tissue models.