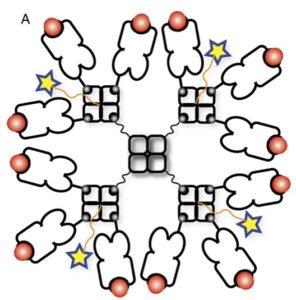 T cells via the T cell receptor (TCR) recognise peptides (antigens) only when they are presented by major histocompability complex molecules (pMHC) on the surface of antigen presenting cells. The development of pMHC tetramers (conjugation of 4 pMHC monomers) enabled detection of antigen specific T cells in vitro without the need of stimulation. In spite of their wide use in T cell biology, a major caveat of using pMHC tetramers, is the inability to detect very rare T cells without the need of T cell enrichment, as well as detection of low binding affinity. To circumvent this, researchers led by Mark Davis aimed to develop pMHC dodecamers i.e. molecule that has 12 conjugated pMHC monomers.

Tetramers are useful tools that allow direct ex-vivo characterisation of T cells without the need of antigen stimulation. Ex-vivo antigen stimulation of cells can change the transcriptomic and protein expression profiles of T cells, which can confound results of the experiment. Studies have shown that αβ and γδ T cells that do not bind to tetramers are still capable of producing antigen-specific T cell responses, illustrating an underestimation antigen specific T cells when using tetramers.

In summary, this study shows the utility of dodecamers to detect low TCR affinity T cells as well as the potential to replace tetramers with dodecamers for CyTOF experiments.