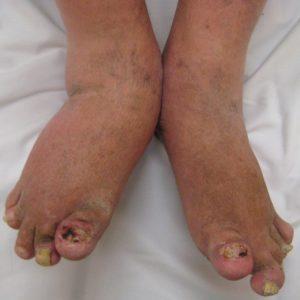 Psoriasis Arthiritis (PsA) is a chronic inflammatory disorder of the skin and joints. Individuals who suffer from PsA often have psoriasis, inflammatory skin disorder, followed by arthritis, inflammation of the joints. Understanding of progression PsA pathology in humans is limited, and majority of knowledge is based on studies of joint biopsies, which are invasive and do not explain how the disease spreads from skin to the joints. Researchers from Germany and Romania aimed to determine whether immune monitoring of innate lymphoid cells (ILCs) can be a potential alternative to biopsies to determine immunopathology and progression of PsA.

In this study, Soare et al., showed that PsA is associated with alterations in circulating levels of ILCs. They observed a positive linear relationship between the number of circulating ILC3 and diseases severity, where individuals with most severe PsA had highest level of ILC3, a relationship not observed for ILC1 and ILC2.  The cytokine pattern of ILC3’s overlaps with the increased cytokine expression of IL-17, IL-23 and TNF-α observed in PsA patients. Thus, increased levels of ILC3’s may be associated with increased inflammation which result in spreading of disease from skin to the joints. Soare et al., also observed lower ratios of ILC2/3 associated with local clinical manifestations of PsA such as synovitis, osteophytes and bone erosion. Additionally, higher ILC2/3 ratios were associated with remission. This could be due to increased levels of ILC2 related cytokines, that have been shown to  be proresolving agents of arthritis.

Unlike psoriasis which does not alter major ILCs, PsA was associated with changes in ILCs homeossista. Thus a potential progression from psoriasis to PsA could be due to the a role of ILCs in immunopathology, a finding that needs to be confirmed using further studies.