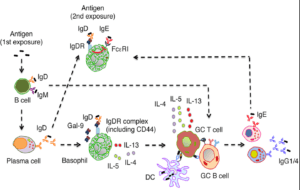 Unlike immunoglobulin (Ig) M, IgG, IgA and IgE, the role of IgD in antibody mediated immunity is unknown. IgD is co-expressed with IgM on mature B cells, and is best known for its function as a B cell antigen receptor. Upon antigen exposure and B cell interaction with T follicular helper T cells, B cells down regulate IgD and differentiate into IgM secreting plasma cells. Some of these plasma cells can secrete IgD, which make up approximately 1% of total antibodies. Unlike IgM, IgD does not recruit pro-inflammatory complement proteins, suggesting that it may play a role in non-inflammatory mediated immunity. The specific contribution of secreted IgD has not been explicitly defined.