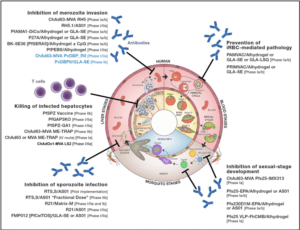 Simon Draper from Oxford University began his talk with an interactive session introducing the types of Plasmodium sp.and their life cycle. He also gave a brief overview of the human challenge model of malaria infection known as controlled human malaria infection (CHMI). Where healthy individuals are infected with attenuated parasite that causes very mild symptoms. The CHMI model has been a very important asset to the malaria vaccine research field and has led to promising results. However, in spite of this, the malaria research community has experienced challenges in developing an effective vaccine. He emphasized that the ideal vaccine against malaria would be the one that stimulates immune responses against various stages of the malaria life cycle.

Antibodies induced by natural infection confer protective immunity in individuals from Malaria endemic regions. Efforts to induce potent vaccine immunity against the blood stage of the malaria lifecycle have been unsuccessful. The most advanced malaria vaccine, RTS,S/AS01 (GSK) was very effective in non-malaria endemic countries but showed a moderate efficacy of 30% in Kenya, Tanzania and Malawi. This result could potentially due to induction of short-lived immune responses by candidate vaccines. Highlight the need for improved research, particularly research conducted in endemic regions.

Research presented by Caleb Kwame Sinclear from Tokyo Medical and Dental University aimed to assess the kinetics and longevity of naturally induced antibody responses to 6 malaria candidate vaccine antigens in malaria endemic populations. Findings from the study suggested that high prevalence of IgG2 antibodies were observed in low malaria transmission areas and this could confer protection against the parasite.

As highlighted above proteins on the surfaces of free merozoites are likely targets of functional antibodies. Studies have linked opsonizing antibodies killing P. falciparum parasites through Fc receptors in corporation with polymorphonuclear cells as one of the naturally acquired immune mechanisms. Eric Kyei- Baafour from Noguchi Memorial Institute for Medical Research measured total IgG responses to crude schizont extract and MSP119K using indirect ELISA in Ghanaian children (aged 0.5- 13 years, N=238) in a longitudinal malaria cohort study. He measured the ability of the antibodies to opsonize merozoites measured using a flow cytometry-based opsonic phagocytosis (OP) assay. The data presented showed that opsonic phagocytosis correlated with protection, which may have been mediated by anti-MSP immunity.

The Development of a highly efficacious and potential antimalarial vaccines is important for control and elimination of malaria. There are numerous targets against malaria being investigated. One of the promising antigen discovered is RH5, the first highly conserved target within the P. falciparum blood-stage merozoite to be susceptible to vaccine-induced broadly neutralising polyclonal antibody (Douglas et al. 2011). Eunice Kiamba from Kenya Medical Research Institute (KEMRI)- Wellcome Trust, is currently investigating the potential of Plasmodium helical interspersed sub telomeric (PHIST) proteins, a group of proteins present in the parasite exportome as potential vaccine antigens. Based on her research she identified PHIST PF3D7 0936800 and PF3D7 0532400 as potential targets of antimalarial antibodies. She is currently investigating these proteins further.

Malaria can also cause severe morbidity in pregnant women known as pregnancy associated Malaria (PAM), a major public health problem. PAM is associated with poor pregnancy outcomes that commonly include maternal anemia and featal growth alteration. The VAR2CSA antigen plays a central role in pathophysiology of PAM. Sèyigbéna Prudence Déo-Gracias Berry from IRD Benin/University of Abomey-Calavi  presented her research that aimed to prevent this complication by administering 3 doses of thier vaccine candidate PAMVAC with 2 different adjuvants at different time at the nulligravid woman. The research quantified memory B cell specific responses against the PAMVAC vaccine antigens using elispot. Based on their primary results, they concluded that the combination of PAMVAC with GLA-SE (a TLR-4 agonist) is associated with the strongest B cell response to the vaccine in women of childbearing age before their first pregnancy.

Malaria is still a major problem in Africa, and a lot of research is focused on developing effective vaccines against this infection due to this there is promise of this being achieved possibility within the next 5 years.